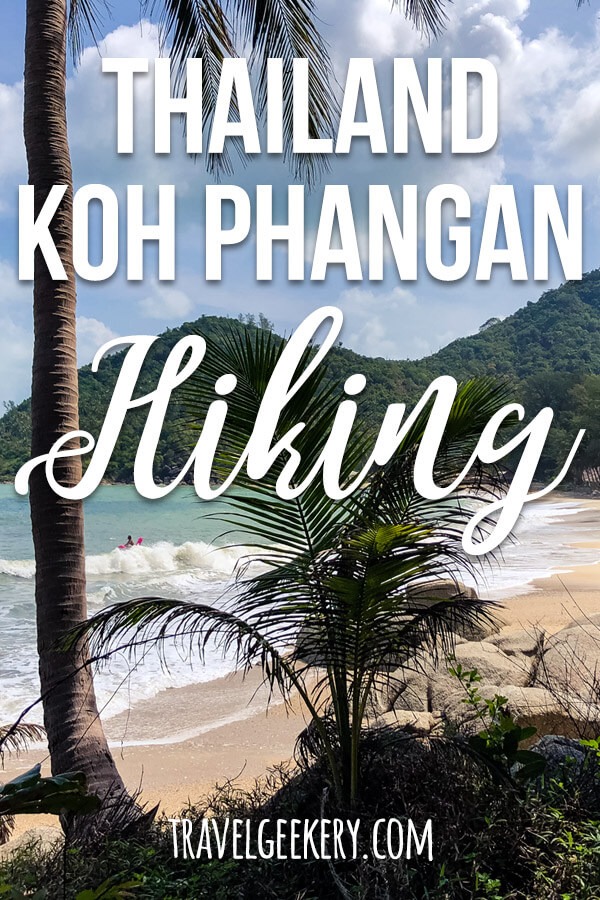 I’ve been on Koh Phangan for a few months now, but I didn’t do much of hiking. There’s always enough to do on the island and I tended to prefer working in cafés or just being lazy rather than hitting the trails. So it was time to change that!

You’d be surprised to learn that there are many options for hiking in Koh Phangan.

The most famous one is the Bottle Beach hike.

But, to my astonishment, most people don’t actually know there are two different routes that you can take. Several articles online just refer to THE Bottle beach hike without specifying which one it is.

So I decided to hike both to bring you a complete overview of the two hiking routes to Bottle Beach.

I’ll speak about the direction in terms of going TO the Bottle Beach, but you can hike it in the opposite direction too, of course.

Bottle Beach, located in the northeast of Koh Phangan, is one of the most beautiful beaches on the island and in the whole Thailand. It’s secluded and no excess development has been done there.

It’s not easy to get to Bottle Beach. The most viable option is to take a longtail boat from Chaloklum fishing village. And many people do just that, especially on calm (wind-free) days.

While a dirt road does lead there, it only comes from the East and it’s mostly the 4×4 vehicles from local resorts that bring their guests in that way.

The only other viable option is to hike.

And trust me, there’s no higher degree of bliss you’ll experience after the strenuous hike when you finally take off your sweaty clothes and let the gentle waves at Bottle Beach caress your tired body.

What you need for either Bottle Beach hike

There are TWO Bottle Beach hiking routes (the story behind)!

Upon setting off on my official first ‘bigger’ hike in Koh Phangan, I overheard a couple asking a woman who was just about to pull off from the parking lot:

“Hey, is that the start of the Bottle Beach hike?”

“Yes, it is,” she replied. “But there are two ways, the shorter one is to the right and the longer one goes straight and follows the coast. But they’re not easy, you know.”

“Sure, we’re ready for that,” they cheerfully replied.

I thought “What, two options?!” quickly followed by “What does ‘not easy’ mean??”

My heart skipped a beat as I started out on the shorter jungle route. Needless to say the inquisitive couple never caught up to me, even though I hike slowly, so I assumed they went the longer way.

Upon making it to the Bottle Beach, I toyed with the idea of hiking back on the longer route. But my tired feet, together with a slightly off-putting text about the difficulty of the longer route, which I found online at that moment, prevented me from making the attempt.

A few days later, I learned from local expat friends that they hike the longer coastal path a few times per year and that it’s not bad at all. That gave me the necessary encouragement to attempt and successfully accomplish the longer Bottle Beach hike too.

Starting point of both Bottle Beach hikes in Koh Phangan

In the direction to the Bottle Beach, you’ll have the same starting point. You’ll need to arrive at the end of the paved road in Koh Phangan’s North.

You’ll follow the ‘Middle road’ to Chaloklaam and then further east even past Coral Bay Beach (Haad Khom). You can’t get lost since there’s only one main paved road up there.

You’ll park your scooter at the very end of the paved road, there’s a large enough area for that.

Flex your muscles, cover yourself with repellent…and 3, 2, 1… GO!

Like most people, this is the hike I took primarily. It’s what some refer to as the shortcut, since it’s the shortest path to reach the Bottle Beach.

Upon entering the dirt road, you’ll see a tiny path on your right with a dark blue sign saying “Bottle Beach Walk → Back by Taxi Boat” and a phone number. This ad serves as the main sign to mark the start of the Jungle Route to Bottle Beach.

This path is not marked by plastic bottles, even though most articles online suggest otherwise. I only saw one plastic bottle on a tree – that was it.

However, there’s a helpful blue-yellow marking covering the whole path. Follow that and you’ll be fine.

The maps.me app mentioned above can also fully navigate you on this path. It helps to have it on and occasionally check, even though the chance of wandering off is rather minimal.

As the name suggests, you’ll be walking through the jungle most of the time. While the path may get challenging at times, meaning some of your steps will need to be higher than comfortable, the hike is not too difficult. So if you’re overall pretty fit and used to hiking every once in a while, you’ll be completely fine.

You’ll be crossing large rocks and boulders, following narrow paths and sometimes, but only sometimes, the canopy of trees will open and you’ll see a bit of the turquoise ocean in the distance.

The hike goes up and down, but mostly up in the first half and down in the second, since you’ll be basically crossing over a hill. At one point on the way downwards, a large rocky area opens from where you’ll have a great overview of the surrounding hills covered by lush greenery.

The last part is short and once you’ll hear the sound of waves crashing, you’ll know you’re close to your destination.

I found this hike incredibly peaceful, because it’s just so quiet on the path. Other than an occasional rustling in the leaves produced by birds and lizards, you’ll be far from any noise.

It took me about an hour and half to finish the trek, but I’m a slow hiker and like to observe things around me. :)

This trek is called Coastal, but you’ll be under the jungle canopy about 80% of the time. There are some beautiful views of the sea and several lookout points. Since you’ll be hiking near where the boats go, you’ll be hearing their engines roar quite a bit.

It took me 2,5 hours to finish this hike. It was a bit longer than I expected, but still manageable. Much like the first hike, if you’re fit and hike occasionally, you’ll have no problem.

I heard how difficult this hike was, how you often have to use all four limbs to grab and climb, and how there are scary parts… It almost prevented me from trying it altogether!

Fortunately, it wasn’t like that at all. My knees are not in the best shape so I did use my hands quite a bit to prop myself up in areas where I had to climb more than hike. But that’s the big advantage – there are trees everywhere that’ll give you a helping branch. :)

Plastic bottles attached to tree branches mark the way. Just not so much at the beginning.

So while it’s good to follow the plastic bottles, don’t rely on them completely and have the maps.me app on your phone. Occasionally checking your position will give you peace of mind. While on the trail, I met a guy who said he got lost and wandered off-path for an hour!

Just know that the maps.me app is useful for this route only because it has the path marked. It will not navigate you there. That functionality works just for the other route. I have no idea why.

I did hear more rattling around on this path and even got to see two little monitor lizards. I don’t have any photo proof of the sightings, since jungle creatures are not used to humans and run for cover as soon as they hear you approach.

You’ll be going up and down many, many times along tiny paths surrounded by large boulders and dry grass, paths carved out by tiny river streams, on roots and rocks and some sandy spots.

While most of the time you’ll be hiking high above the water level, towards the end the path goes down and shows the first glimpse of magical Bottle beach.

From there it’s just a narrow path lined by a few bungalows, which are completely falling apart, and with vegetation taking over. The last few meters align with the Jungle Route and will spit you out at the same end of the Bottle Beach.

Amenities at the Bottle Beach

From what you might have read online, you‘d expect the Bottle Beach to be a deserted paradise just cut straight out of the movie ‘The Beach’. Right?

Well, it’s not like that at all. The four resorts located at the Bottle Beach each have their own beachside restaurants.

So no need to carry homemade sandwiches for the hike as you can have a proper meal after the strenuous hike accompanied by a fresh coconut. :)

Getting Back from the Bottle Beach

Unless you’re a serious hiker, I don’t see the need to hike back. I certainly didn’t have the desire. After my feet cooled down in the water, they were not into hiking a meter more.

But we’re all in luck, because there are boat taxis! The boats depart at the top of every hour, and on busy days even more often.

Simply walk to the boats parked on the beach and search for their captains. They are usually just chilling in nearby shade.

A one-way ride will cost you 150 baht and you pay to the captain. Expect a nice short scenic ride taking just about 15 minutes.

Boats depart to either Chaloklaam pier and/or to Haad Khom Beach (Coral Bay). From Haad Khom it’s easy to walk back to the start of the Bottle beach hike, i.e. the parking lot where you parked your scooter earlier. Bear in mind it’s still about 15 – 20 minutes walk from there, following a paved road.

If you’d like to avoid having to walk to your scooter, just park it in Chaloklum by the pier in the first place and ask for a taxi to the Bottle Beach trek starting point. They’re well used to such requests at the pier and surrounding areas.

What if you fall in love and want to stay?

The cheapest most basic bungalows with no A/C can cost as little as 400 baht per night.

I found both hikes truly amazing. I met almost nobody, even when hiking the Coastal path a day before the Full Moon Party, when Koh Phangan gets especially busy.

If you’re short on time, I’d suggest you take the Jungle route. If you have plenty of time, and at the same time need some amazing photos from numerous viewpoints, go for the Coastal route.

Either way, you’ll experience the magic of hiking Koh Phangan, for which you’ll be rewarded by the warm embrace of the stunning Bottle Beach.

So – enjoy the hike!

And let me know how it went. :) Also, if you’re missing any information about either hike, let me know!