Any old India hand would tell you that the best time to travel to India is during the winter season, from October to January, when even the infamously hot and humid Indian weather is surprisingly cool and pleasant, the locals are friendly and welcoming and you may have a pleasant trip without the stress or the sweat of an Indian summer. Winter is a lovely time for a trip to India for a foreign tourist. It’s not a wonder then that the country is flooded with tourists during winter, trying to escape the ghastly cold of London or Boston, and willing to settle for something less severe, while experiencing an exotic new culture.

But before you start dreaming of spending this Christmas in India, possibly sunbathing on the welcoming, sun-kissed beaches of Goa, consider this – all the best hotels and resorts are filled to capacity from October to January. The rates are incredibly exorbitant, with each hotel trying to make the most of the peak tourist season. If you’re a tourist traveling in India on a budget, then it would be impossible for you to afford the best hotels and lodges, and you may have to settle for less pricey alternatives. This may not be a great idea as most of the cheap hotels and tourist lodges in India lack the basic amenities that are expected by tourists who are used to much better living standards in the West. Now, before you cancel your trip to India, which you’d been planning for a long time, completely put off by our talk, we are here to tell you that there’s a way out! Experience the Indian Monsoon!

[pullquote align=left]
Monsoon? Isn’t that the time when it rains heavily in India, when half of the country is flooded and the nation’s infrastructure is on the verge of a breakdown?
[/pullquote] Well, that’s only partly true, and we don’t have to tell you that it’s a stereotypical view. First, Monsoon rains in India are not the same everywhere, and after an initial period of heavy downpour, sometime in the month of June, the Monsoon settles down, and it rains less frequently and not more than a couple of hours a day. Some of the loveliest places in India, such as the wondrous Ladakh region, right in the bosom of the Himalayas, receive no rains at all. And while the infrastructure does suffer a breakdown on certain days in some cities (such as Mumbai), it doesn’t stay broken for long as an entire army of workers are immediately put to work to get it up and running again. But really, most of the other major cities such as Bangalore and Chennai in the South and New Delhi and Jaipur in the North remain completely unaffected throughout the Monsoon.

The best part? The Monsoon season lasts from June to September, which is a period of least tourist activity. Quite possibly, because of the negative connotations associated with the Indian Monsoon that we talked about, majority of foreign tourists give India a miss during this period. Well, the loss is all theirs, because what it does is to leave the best hotels and the most luxurious resorts in the country completely open to you, as they fight each other to get you to favor them over the competition, offering some of the best rates possible. As a tourist, even as one traveling on a budget, you’re suddenly in a position of strength where you can pick and choose, and select from a whole host of options available to you. So you should definitely book your plane to India this Monsoon – we are in the middle of it at the time of this writing – and enjoy a relaxed vacation, living in the best accommodation.

Some of the best Monsoon destinations in India, where you can really have the time of your life, as one of the few visiting tourists around and be given the royal treatment are –

Getting to Ladakh is as close as you’ll ever get to the magnificent Himalayas. The landscape and the natural scenery here is simply outstanding. The locals are incredibly nice and peaceful people and the Buddhist monasteries are simply wonderful. You can just take a flight from Delhi to this place.

The state of Kerala is a highly tourist friendly state, and smart enough to target the Monsoon traveler to India by offering a whole lot of discounts at high quality resorts, where you may get the full Ayurveda treatment that relaxes both mind and body, for an absolute pittance. The Monsoons also bring out the beauty of this scenic state, with splendid greenery and magnificent lakes, where you can spend days living in lovely houseboats.

If you’re one of those who really love rain, then you’ll have a grand time in the North-Eastern state of Meghalaya, which is home to the wettest place in the world, Chirapunji, and is a lovely sight during the Monsoons. But crucially, the rains do not lead to a flooding unlike in the Gangetic planes, as this is a hilly region where the rains get easily washed away. You’ll like the thick greenery of this state, and love its natural attractions such as the astonishing Living Root Bridges, which are man-made natural bridges made out of the roots of extremely old rubber trees.

Goa is without doubt the most popular tourist destination in India and has world-class facilities for tourists; but during the Monsoon, Goa is half-deserted, as nobody would want to be on the famous beaches of Goa in the middle of a torrential rainfall. Luckily for you, there’s a lot more to Goa than just beaches – such as wildlife sanctuaries, river cruises, vintage heritage sites from the Portuguese era, hiking trails through thickly forested hilly regions and great food. Plus, remember what we said earlier about high quality hotels and resorts being incredibly cheap during the Monsoon season in India?

The state of Rajasthan is right in the middle of the Thar desert, where it hardly ever rains, not even during the Monsoon season. The region is historically significant as it was once ruled by the Rajput kings who built some of the best palaces in the country. Many of these palaces have now been converted into world-class 5 star hotels, which are amazingly cheap. The desert in Rajasthan is a stunning sight in the moonlight, and you’ll also love exploring the cities of Jaipur, Jodhpur and Udaipur, as you experience their several splendid attractions. Plus, the locals here are extremely hospitable people, so be prepared to be treated like royalty!

Have you been to India during the monsoon season? How was it and how did you cope?

Do you love pinning? Here’s a pin for you! 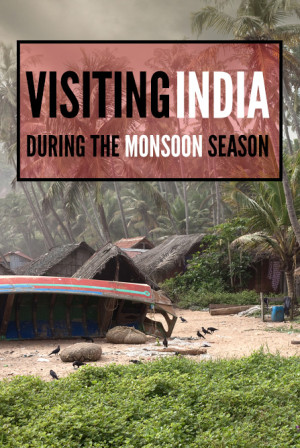 This is great info! I can’t wait to check out your suggestions when we travel there in July. Thank you!

Kerala is an excellent destination for monsoon season because Kerala is full of nature and there is a different way of looking at nature in monsoon. I like your blog. You share the actually right information. Great!

Thank you very much, David! Yes, Kerala is amazing yearround, I can't wait to go back!

Hi I am travelling down the Ganges in 10 days time. I am so excited. The monsoon makes it possible to sail down he Ganges as far as Varanasi. This is not possible at dry times of the year when the river level is much lower. I am also looking forward to seeing India in a different season.

Hey! if you want to travel i would suggest plan before traveling, get to know the weather conditions of that place.You can try this website http://www.skymetweather.com/ or can download its app, here is the link: https://play.google.com/store/apps/details?id=com.skymet.indianweather&hl=en

Thanks for stopping by, Lindsey..! I'm sure you'll have a great holiday there ;)