Is Macau worth visiting? Absolutely!

Macau and Hong Kong are officially part of China, and although each of the two states share aspects of Chinese culture, each keep a certain level of autonomy from China also.

Having been administered by Portugal from 1557 to 1999, Macau still shows signs of Portuguese influence.

The best way to get to Macau is from Hong Kong and it’s just a 1-hour ferry ride. You can get there from China as well, just by crossing the border in Zhuhai.

There are so many fun things to do in Macau. In my opinion, one full day in is enough to see all the most important Macau sights and get the feel for the area.

If you have a lot of time on your hands and don’t care about the expense, you can stay at one of their numerous hotels. Cheap accommodation is scarce in Macau and literally non-existent in the summer months and during weekends.

Where to stay in Macau

In case a day tour from Hong Kong or Zhuhai is not enough for you, you can stay overnight. These are the best hotels in Macau, from the top luxury to the budget-friendly:

No matter how much time you’ve got, here are the main places to see in Macau that you shouldn’t miss:

You’ll find one of the best spots for Macau sightseeing situated on a hill overlooking the city. The Guia fortress was erected in the early 1600’s to protect the city from Dutch raids. The lighthouse was built two centuries later and was the only lighthouse in China at the time.

The Guia hill is a great lookout point where you’d be able to see all the sights in Macau even on a cloudy day. There are also nice gardens to walk around and you can even take a cable car back down to the lower part of Macau. 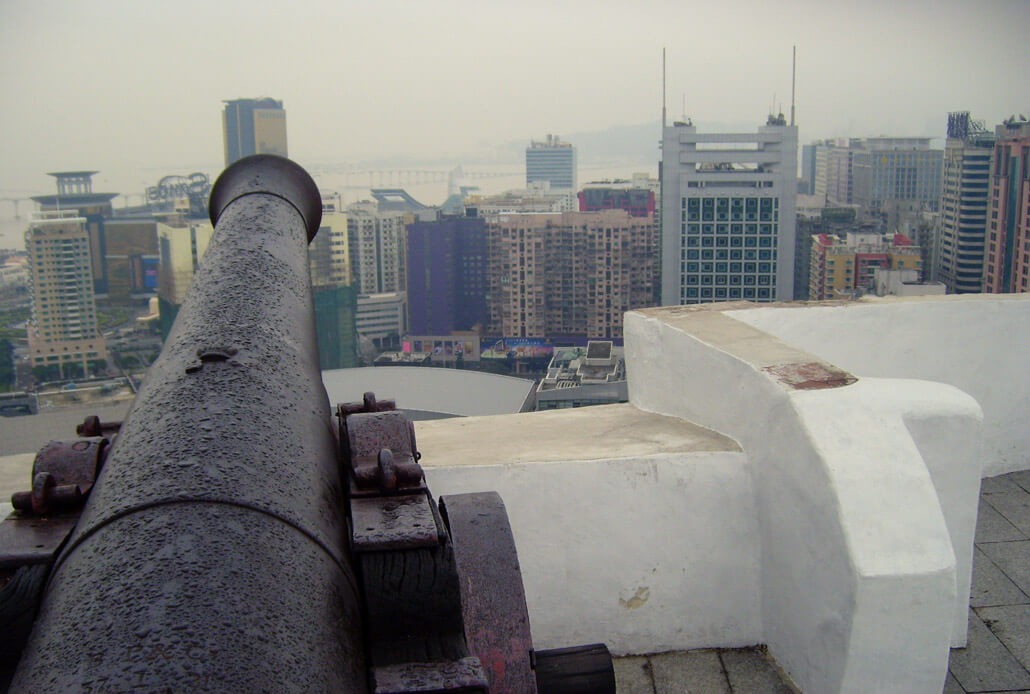 View from the Guia Fortress

Sun Yat Sen, the ‘father’ of modern China, stayed in this house from 1892 to 1894. It’s impressive and well worth checking out, especially as there’s no entrance fee :) 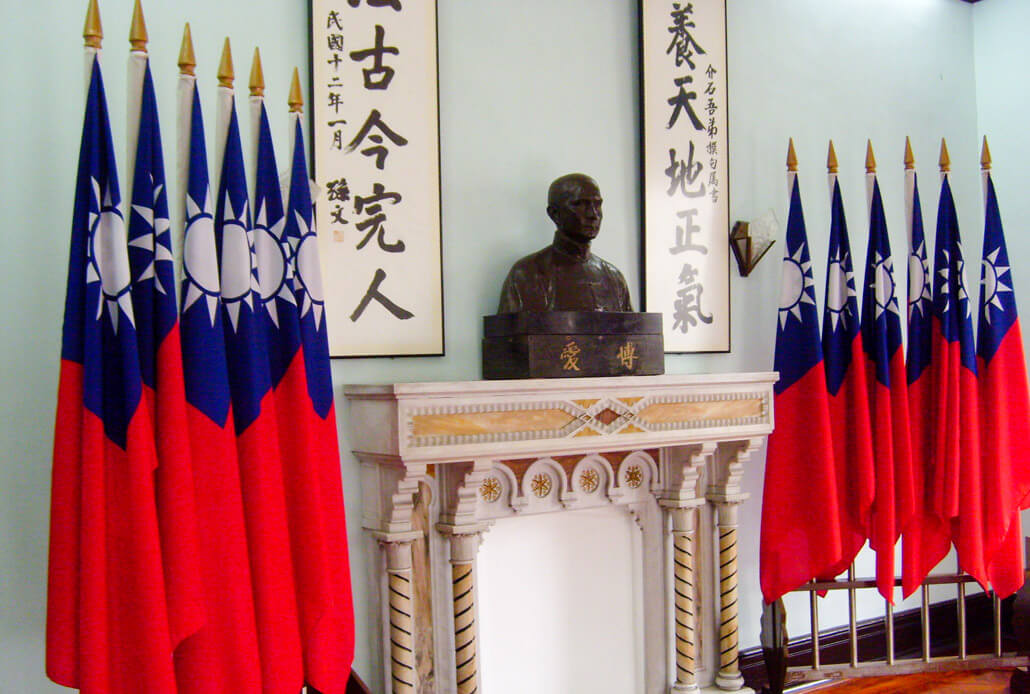 I found this park incredibly calming and it’s one of my favorite Macau travel tips. It helped that I met only a handful of tourists there.

The park uses Chinese landscaping and might look a bit rough on the edges, but I loved that! It’s definitely worth a stroll and it’s also one of the best things to do with kids in Macau. 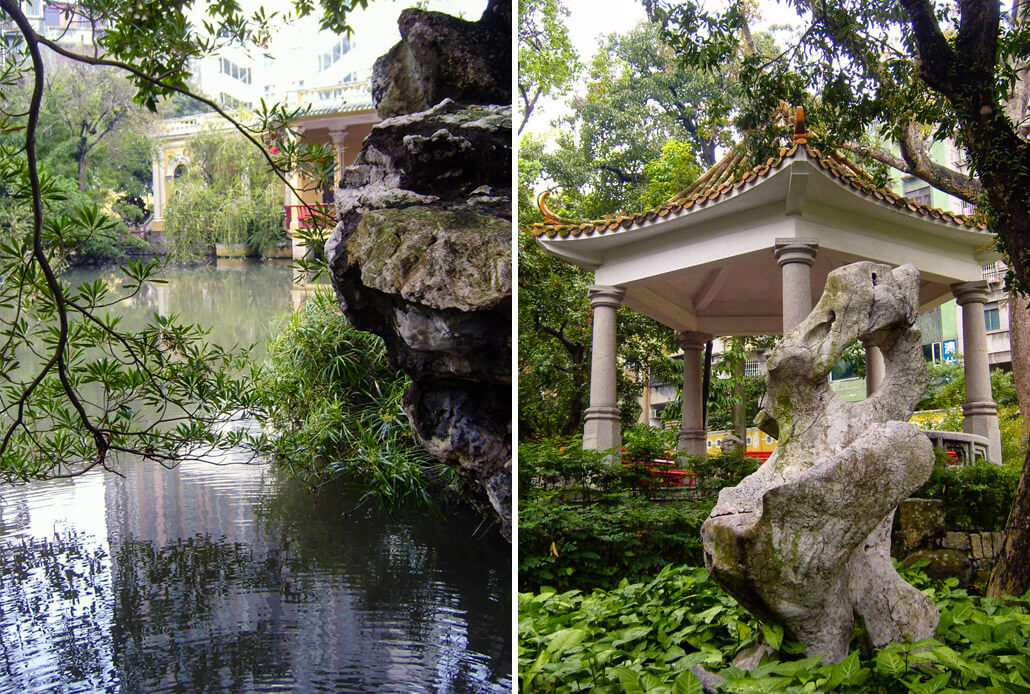 Serenity in the buzz of the metropolis that Macau is: Lou Lim Leoc Garden

Ruins of the St. Paul Church

Expect hoards of tourists, as this is no. 1 sight in Macau. Rightfully so, this ruin is what’s left from a church that once was the biggest Catholic church in all of Asia. It burned down in 1835 and the southern facade and staircase are the only remnants.

There’s a solid steel staircase attached to the back of the façade, so you can walk up and have yet another chance to enjoy great views of Macau.

This is an absolute must-see when you’re left wondering what to do in Macau. 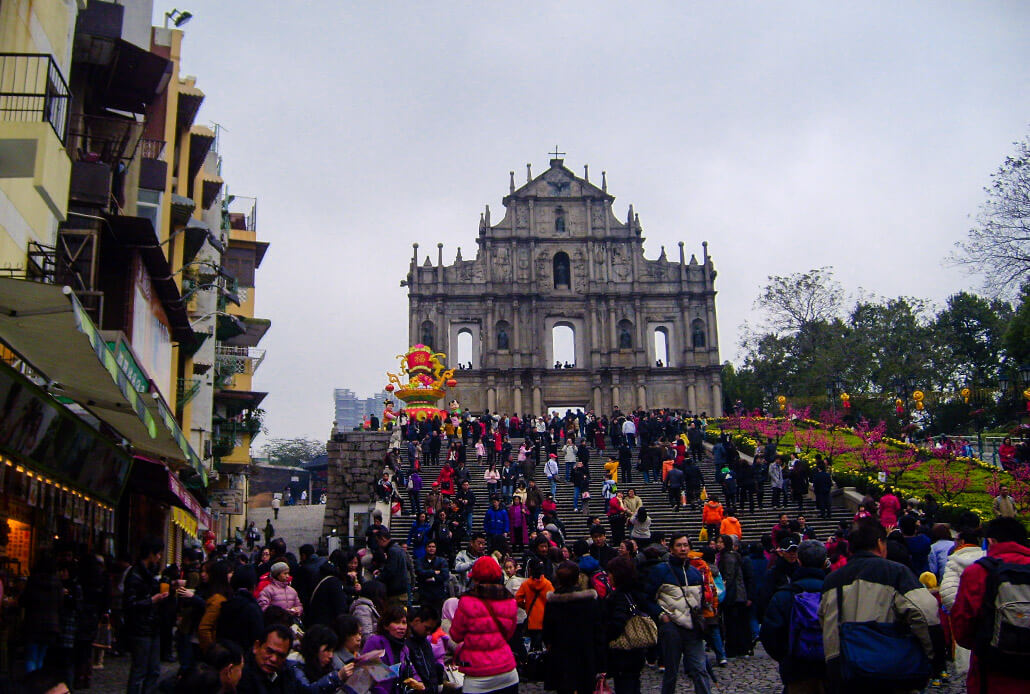 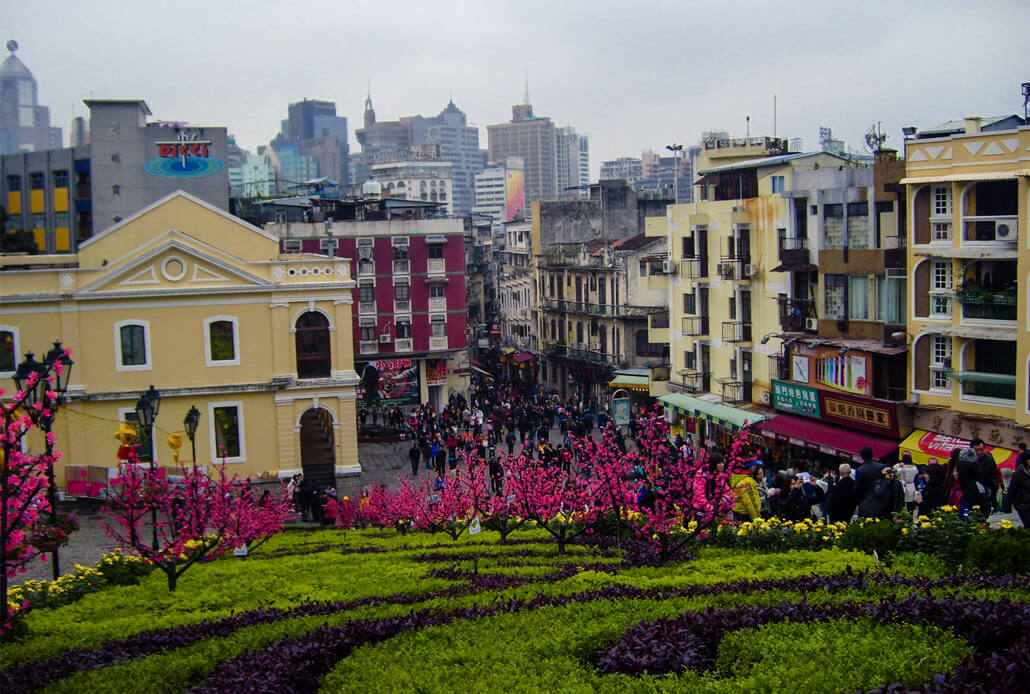 The historic centre of Macau is really picturesque and well preserved. It was inscribed on the Unesco World Heritage list in 2005.

The impressive square that’s at the heart of it is a brilliant showcase of Portuguese architecture. This used to be the colony’s urban centre and they obviously put a lot of work into making it beautiful.

Don’t just admire the buildings, though. Look under your feet, too! The square is beautifully paved into a wave-shaped mosaic. 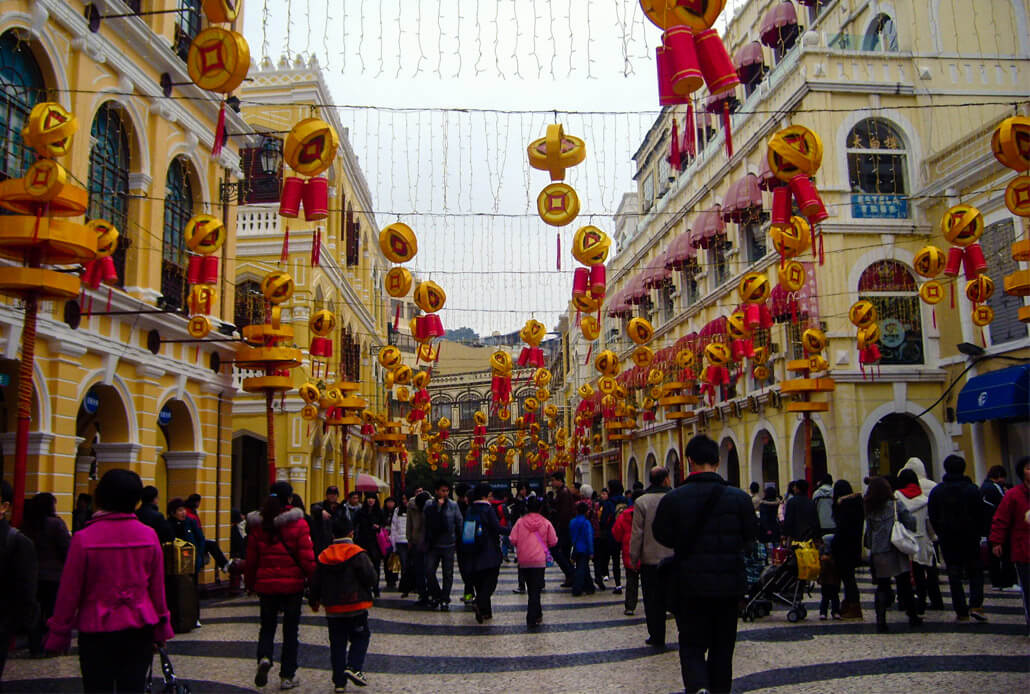 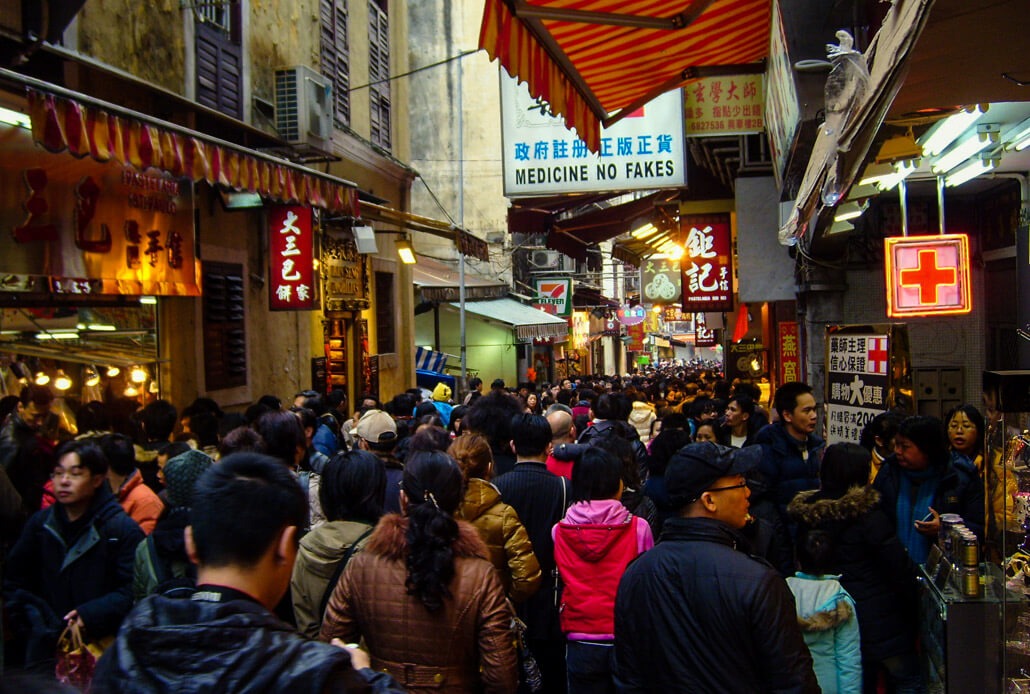 Macau city centre can get crowded… but I visited during a major Asian holiday.

This centuries old temple on top of Barra Hill is a great place to calm down and enjoy the ‘religious’ side of things. It’s dedicated to A-Ma, the Taoist Goddess of the seas. This place also gave Macau its name.

As the legend says, when the Portuguese settlers first arrived to the harbor and asked where they were, the locals replied “A-Ma Gao” (In the Bay of A-Ma), which was eventually shortened to Macau. 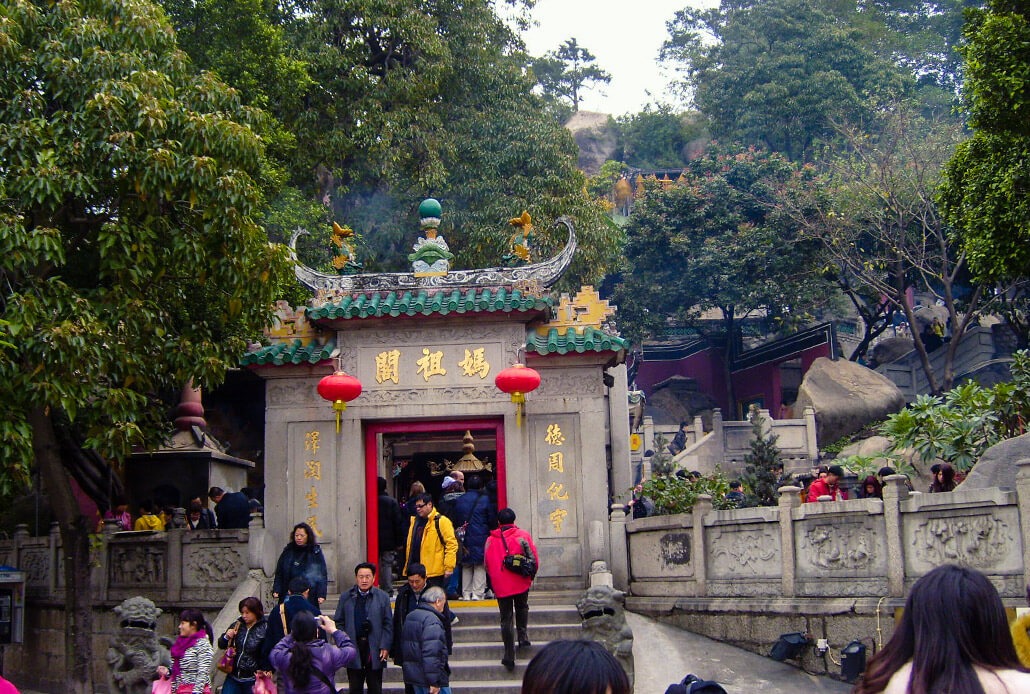 Entrance to the A-Ma Temple 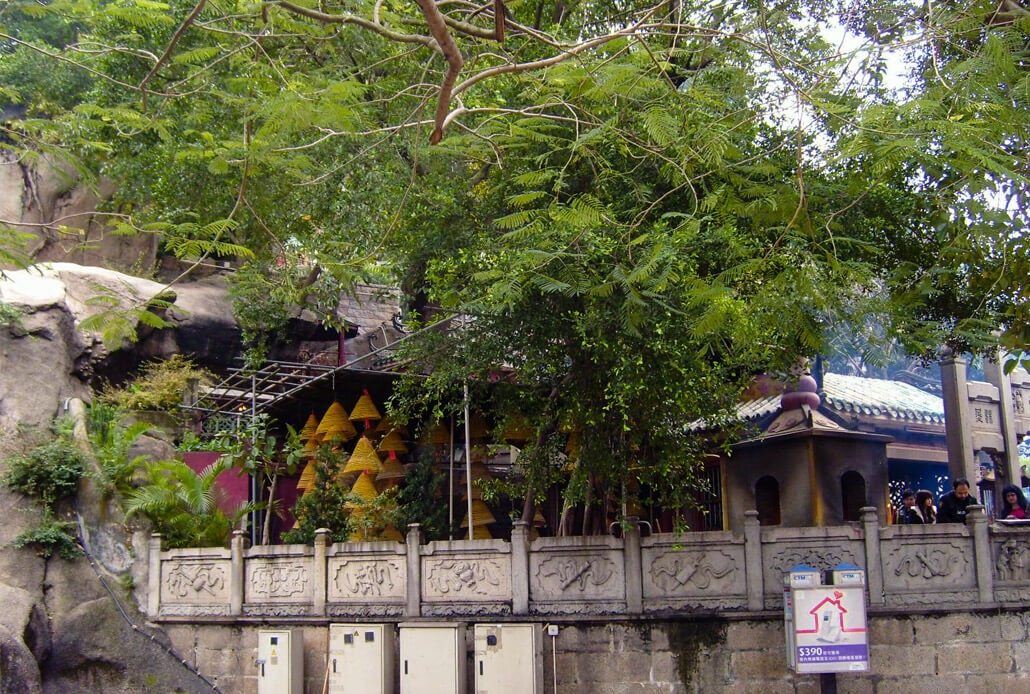 Parts of the A-Ma Temple hidden in greenery

When you’re ticking off important things to see in Macau you won’t want to leave these out. Pick one of Macau’s 33 casinos and immerse yourself in a James Bond-like setting.

No need to lose your family savings, it’s sufficient to just wander around and soak up the atmosphere.

I went to Casino Lisboa and was really amazed. It was my first time in a casino, so if you’ve been to Vegas already, you might not be so taken aback. ;) 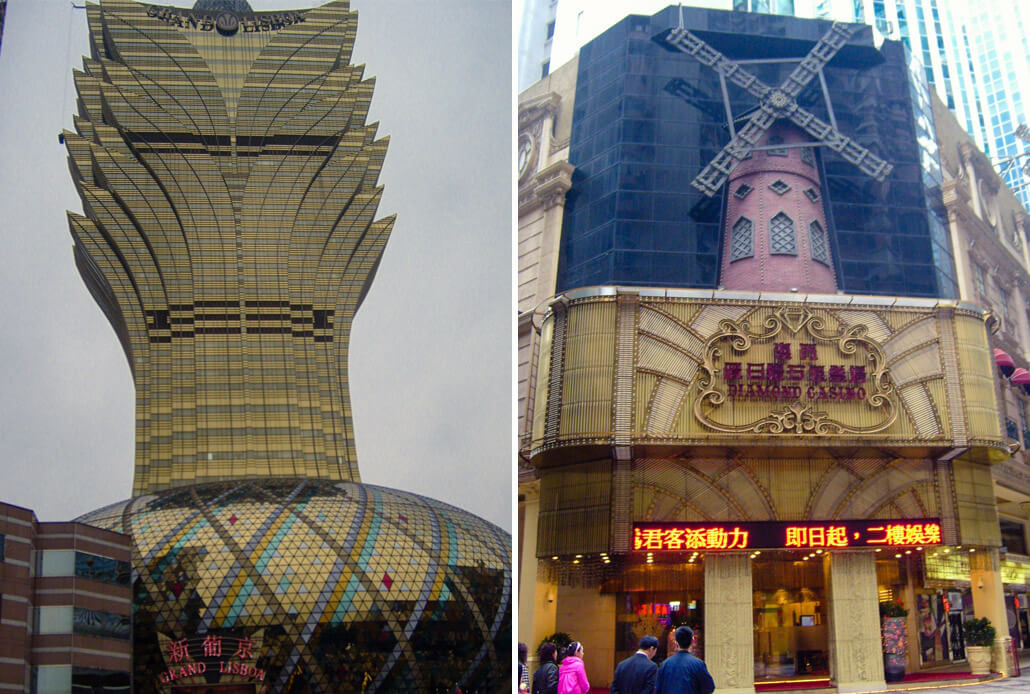 Casinos in Macau: on the right the lavish Grand Lisboa, on the left Diamond Casino 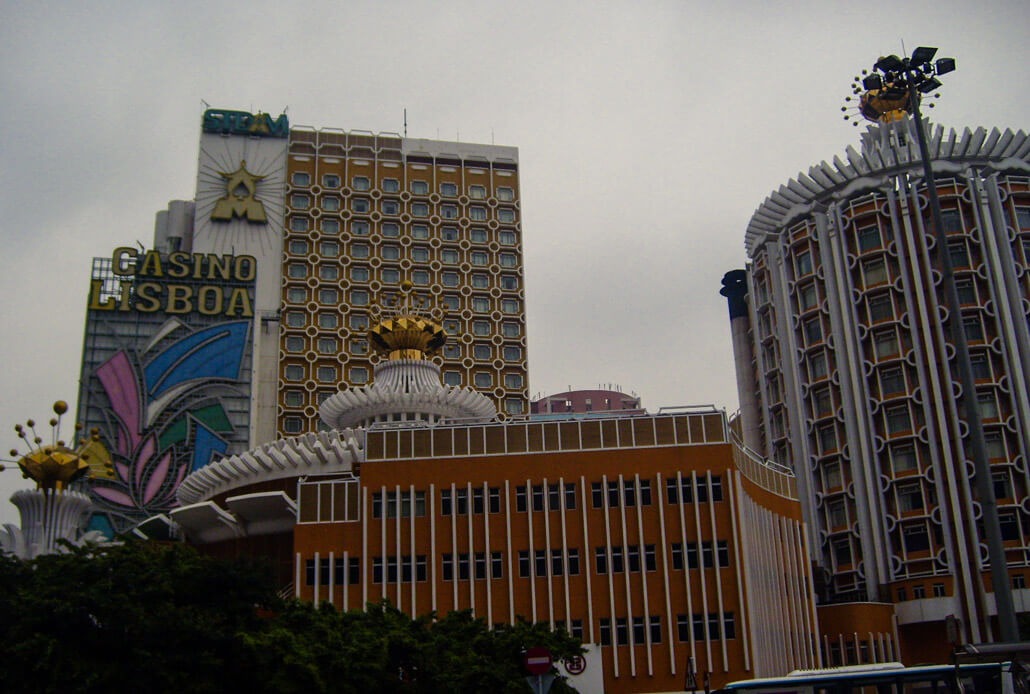 This TV tower offers unbeatable views of the skyline and the South China Sea. Adventurous minds can go bungee-jump from it. There’s apparently also a restaurant and a movie theatre in the tower but there are far more important things to do in Macau than watching a movie!

Get your ticket to Macau Tower here.

Do you feel especially adventurous?  You can do a skywalk on top of the Macau TV Tower and even try your hand at bungee jumping 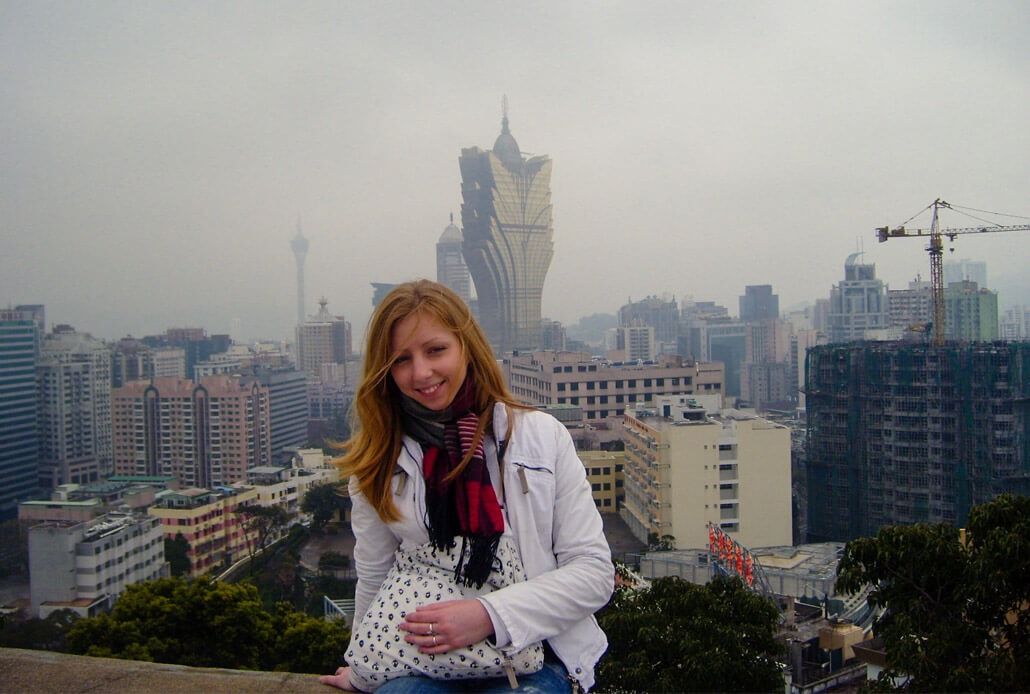 I visited Macau on a particularly hazy day – behind me on the left there’s the Macau TV Tower and in the middle that’s Grand Lisboa Casino.

Kun Iam is the Goddess of Mercy. The statue of her stands on a lotus-like pedestal, and she’s covered in a bronze coating that looks like gold. The pedestal houses a cultural centre with information on Buddhism, Taoism and Confucianism. The statue is known also under the name Guan Yin in Mandarin.

If you’re a museum goer, you’ll have enough to choose from. You can find more than 20 museums on the small territory!

The main museum is Macau Museum. I haven’t visited it myself, but there seem to be alternating exhibitions – you’ll get to understand Macau’s history and the local specifics. The Macau Museum entrance fee currently (2018) stands at MOP10.5, but the entrance is free on Tuesdays.

Other than Macau Museum, check out e.g. the Macao Museum of Art.

Islands, Beaches and Villages in Macau

Except from the main part of Macau that’s attached to China (Macau Peninsula), there are also 3 islands that belong to the territory – Cotai, Taipa and Coloane. There you can find some beaches and more luxury hotels.

Taipa village is supposedly also worth visiting – it was the original settlement of Taipa island and one of two traditional villages that survived in Macau till present.

When in Macau, don’t forget to try the local egg tart! It tastes exactly the same as an egg tart you’d get in Portugal but hey – you’re on the other side of the world!

How to Get Around in Macau

Even though I only had one full day to explore Macau, I didn’t need to use any means of transport other than my feet :) The ferry from Hong Kong drops you off conveniently at the harbor and from there it’s just a short walk to the Guia Fortress.

There are a few public bus lines in Macau. Most of then go in a large circle. You pay for the ride by the driver’s and should always have enough change with you. You can also get yourself a Macau Pass, which can be used on the buses. It’s similar to how the Octopus card works in Hong Kong.

Taking a bus is convenient also for travel to the outlying islands, if you don’t feel like walking for 30 minutes or so.

You can make use of a taxi as well. Look out for white or yellow cabs. 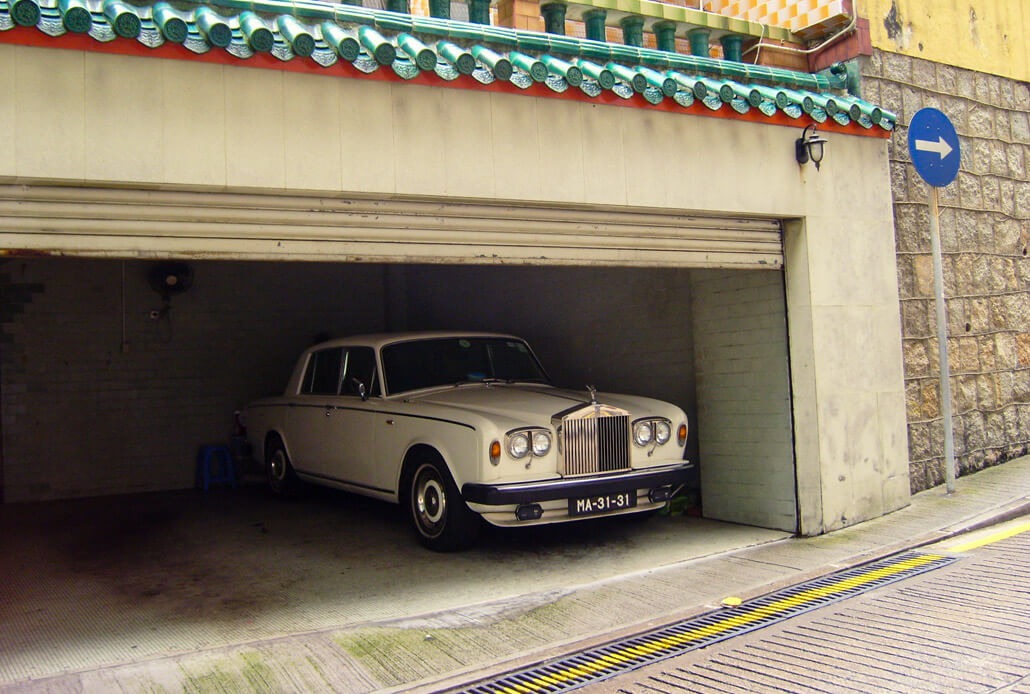 A gem in a garage in Macau: Rolls Royce

Some of the hotels provide free shuttles around the town. Also, a subway is being currently built and might be completed in 2019 or 2020. More info on the city’s transportation can be found here.

This post has been mostly about sights. To have a full-on Macau experience, however, you should do much more than just run around and tick off sights! Here’s a great resource on all the things to do while in Macau. And here’s even a fuller guide on what you can do in Macau including under-the-radar places.

If travelling with kids, check out this guide on Macau with kids. I had no idea there was actually quite a lot to do for the whole family in Macau!

Lonely Planet is another great resource on the background of Macau. Their Macau Lonely Planet Guide is included in the Hong Kong one. See it here.

Are you planning to travel around Macau as well? Read about where to have the most authentic experience in Hong Kong and why you should go on a night safari in Singapore.

That covers the best 10 things to do in Macau. Have you been there? If so do you have a favourite attraction that you’d recommend to fellow travelers?

Would you like to pin this article for later? Here’s a pinnable image for you: 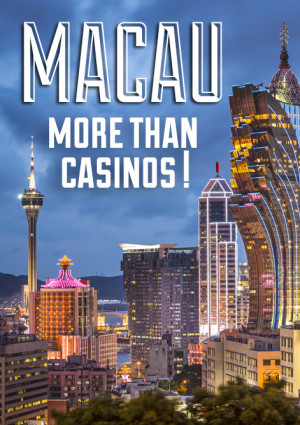 […] And if you’re looking for short trips from the city, you can always take a quick ferrry and discover Macau.   […]

In addition to your tips, we also enjoyed the Macau Museum which provided a good history of Macau's history with both Portugal and China. We were actually disappointed by the egg tarts since they were more more eggy than the ones that we loved in Portugal, but was still cool to eat them in Macau.

As far as culinary things to try in Macau, you can't forget about the pork chop buns ... sounds bizarre, but they are sinfully delicious!

Thanks for the tip!