Vappu. What is Vappu? The strange sounding name makes Labor Day lose its spark in comparison! That’s right, it is the Finnish version of May 1st celebration. But as you’ll see, this is not just an ordinary May Day celebration.

I spent two Vappus in Turku, Finland. One as an Erasmus student and another on a reunion with friends. Both times were similarly crazy and involved a lot of drinking. If you want to mingle with locals, that’s what you have to do. Both Vappus were by far the wildest citywide celebrations I’ve ever experienced!

Vappu is essentially one of the biggest carnival-like festivals in Finland. May is the month when cities with many universities become packed with drunken students. But that’s all right, this time of year it’s fully allowed! 1st of May in Finland is when the ultimate Finnish celebration happens.

It all actually starts on April 30th. The more official days they have to party, the better.

Vappu is clearly one of the quirkiest Finland traditions. But you’ll hardly find a Finn who wouldn’t celebrate it! The tradition dates back to pagan times sometime in the 1700’s.

Back then, it was the arrival of spring that was celebrated. How that unleashed into a crazy partying festival remains a mystery.

However, together with May Day celebrations of the working class all over the world, Finnish students celebrate the final month of their school year. Thus, I blame the students for turning Vappu into a partying/drinking frenzy! :)

What do people do on Vappu? 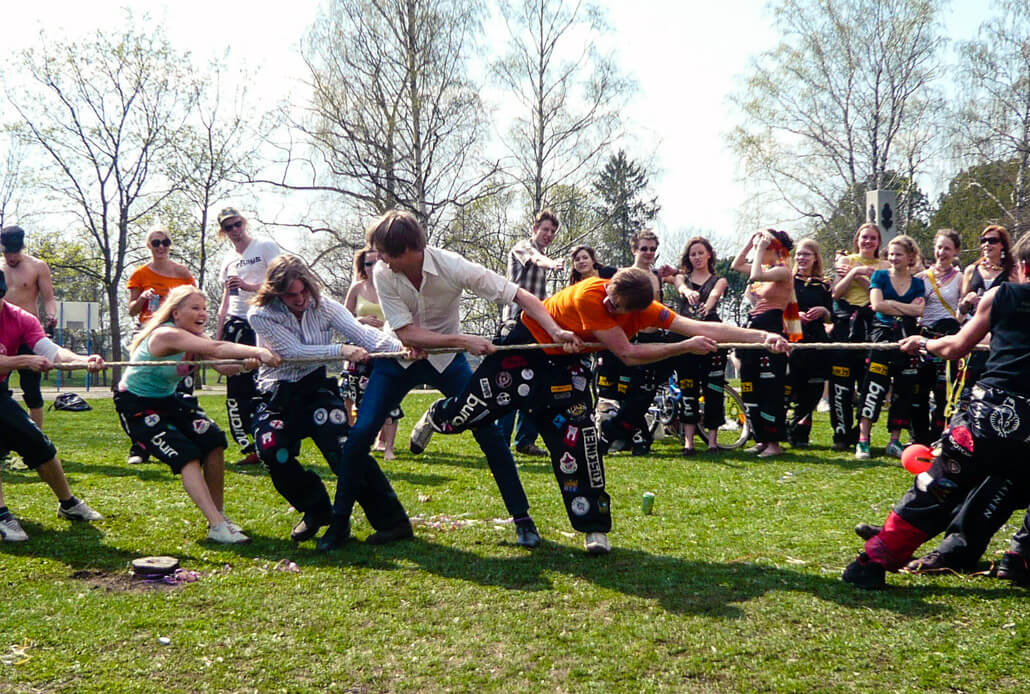 If you yourself would like to come to the Finnish Vappu Festival, it’s very easy! Just book your tickets, accommodation, and you’re good.

Finns are extremely friendly on Vappu, so you won’t have any difficulties joining a bunch of locals. As there are many international students in most big cities in Finland’s south, you can blend in with those as well.

Just a tip – walk around with a crate of beer and be ready to share. That’ll get you friends quickly :)

Such a trip cannot be however recommended to families with kids, as it can get wild sometimes! I witnessed two drunk Finns jumping out of their clothes, running naked around the park and trying to sing on a stage!

Families with children should choose another time of year to see Finland. 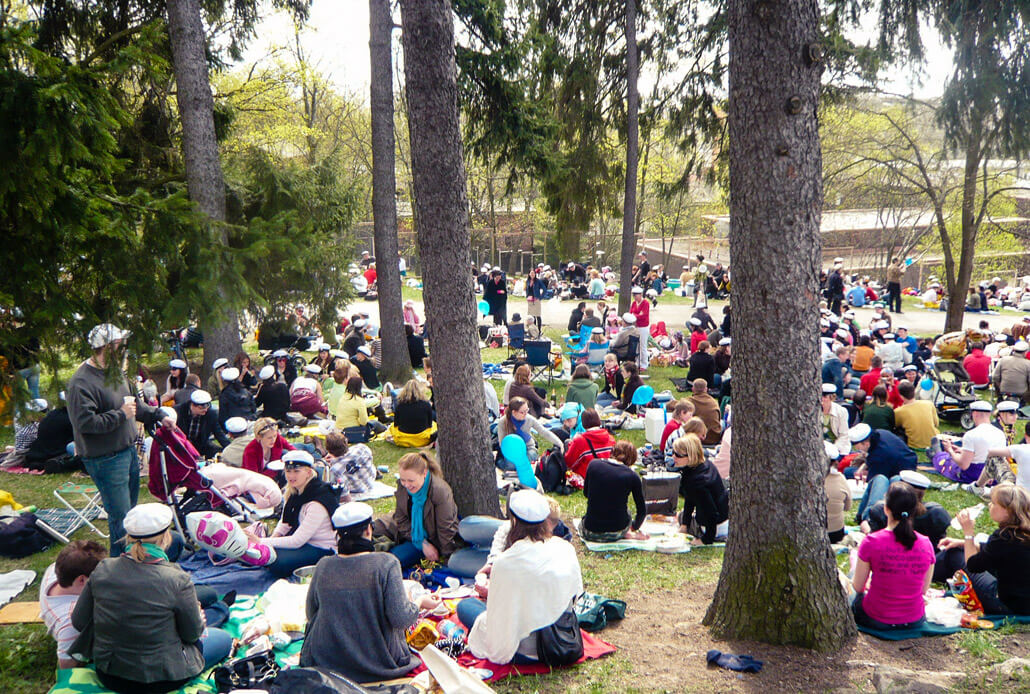 Crowded parks on Vappu in Finland..! Find a free spot if you dare :)

What’s up with the white caps?

Now I’d like to share some fun facts about the white student caps. All Finnish students get these ‘Finnish hats’ upon their graduation from high school and each year they are worn on the Vappu celebration, which is essentially to remind them of their student days.

The most important part of Vappu is putting the Vappu hat on the most prominent city statue, which no Finn can miss (unless they are already unconscious).

These caps can never be washed, so you can imagine how they look after a few intensive Vappu festivals! Older caps usually develop a yellowish color, to mark the many years that have passed since graduation.

The Finnish graduation hat is one of the most treasured possessions of every Finn. Don’t try to take it, not even in a joke! A friend of mine learned this the hard way. 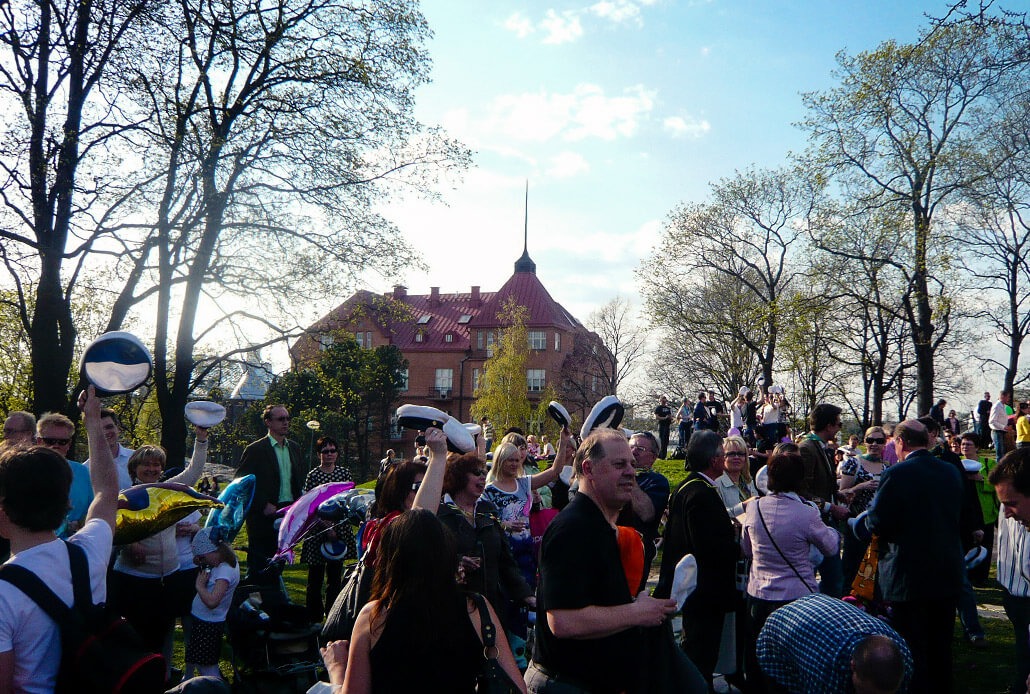 All Vappu caps up at Turku Art Museum Hill

In Turku, the festivities are spread out across most of the parks (especially Vartiovuorenpuisto – Vartiovuori park), all possible public areas (depending on the weather), the main square Kauppatori and also the Art Museum Hill (Puolalanmäki).

The Art Museum hill is where, on April 30, there is a speech held by the Student Union of Turku at 6pm sharp. Everyone waves their graduation caps in response and the speech is ended by throwing the caps into the air. This is the time when they can officially start wearing the white caps for the celebrations.

Next, the crowd of several thousand people moves to the river, to attend to the Lilja Statue, who receives a brush by a giant toothbrush administered by dentistry students mounted on a crane. Once she’s been ‘cleaned’, the representatives of Turku Student Union then place a large white cap on the statue.

And that’s it for the official festivities.

Afterwards, students continue roaming the streets of Turku, drinking and being merry. This continues until the wee hours of the morning and is often finished off by a party in one of Turku’s clubs – both the public ones around the city and in improvised spaces organized by students.

The next day, on May 1, many people (understandably) sleep in. This is the day for a proper picnic in the park! Of course, the heavy drinkers just continue drinking, but in each group of picnickers there’s someone who takes the time to prepare a proper feast. That allows others to just join in and not starve to death while continuing to enjoy their liquor.

We exchange students were not very well prepared for our Vappu picnic. We amassed a good number of bottles of alcohol, but forgot to give the same attention to food. Fortunately, not only did our Finnish friends help out, but during Vappu several vending stalls popped up in the parks selling sausages and other food that goes well with alcohol. 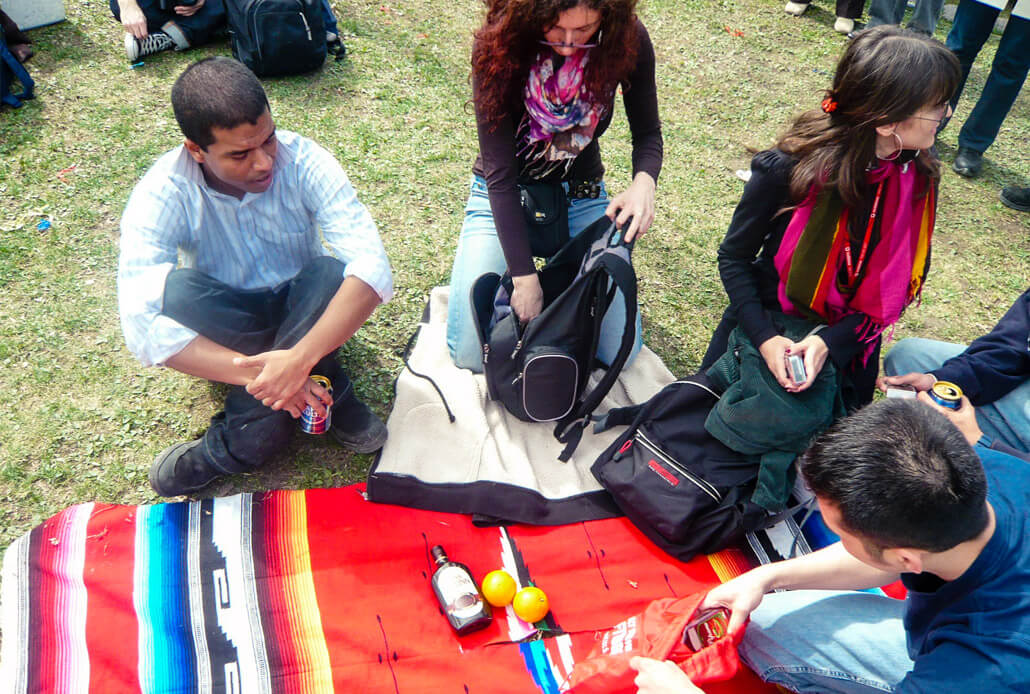 On the Eve of Vappu (April 30) in Helsinki most people hang out between Esplanad park and the main square Kauppatori, around the harbor area and on the Senaatintori Square.

Otherwise the plan of action is more or less similar as in Turku. At 6pm, Havis Amanda, Helsinki’s nude female statue on top of a fountain, receives her oversized white graduation cap. Since the fountain is fully operational at the time of the capping, several students don’t hesitate to go for a swim, no matter the temperature.

May 1 belongs to picnics and performances so you’ll want to hang out in Kaivopuisto park (called also Kaivari by locals) and by the sea in Ullanlinna area – with your picnic blanket, plentiful snacks and drinks, and warm clothing. 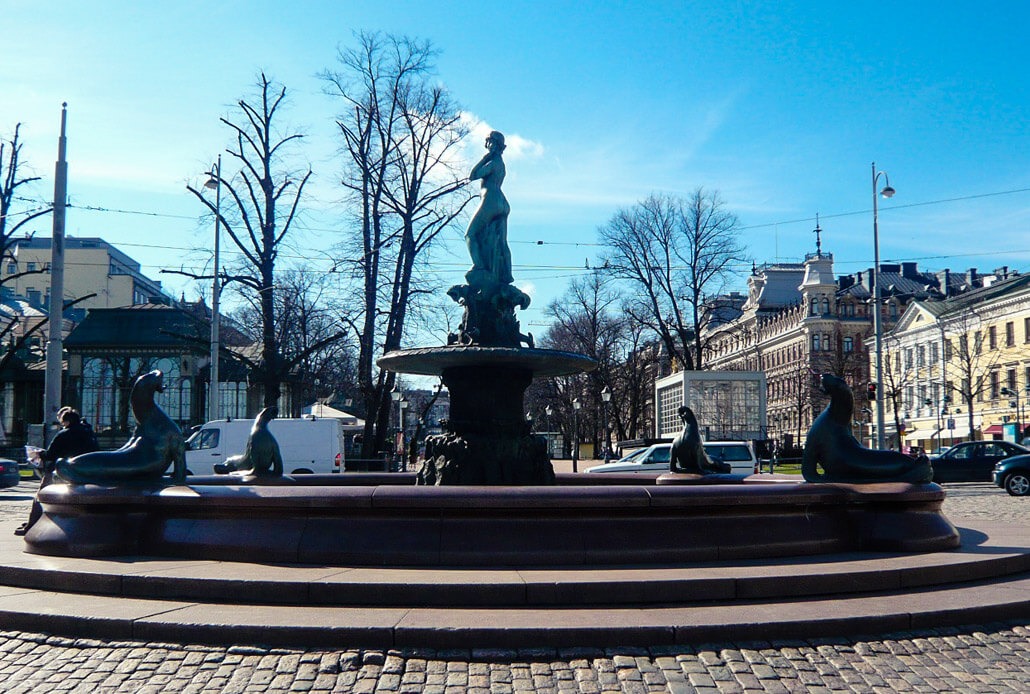 Havis Amanda Statue in Helsinki (picture taken NOT during Vappu)

Vappu is celebrated in every Finnish city. In cities with  large student communities, Vappu celebrations are robust and whole cities wake up after a long winter (read on Finland in winter). Outside of Helsinki and Turku, I’d also recommend spending a Vappu in Tampere. I’m hoping to make that trip someday as well!

Where to stay during Vappu

I assume you’re visiting Finland this time of year in order to experience the true spirit of Vappu. Thus, you want to be near where most celebrations are happening. Here are the best hotels and hostels to stay in Helsinki and Turku during Vappu:

In Helsinki, the following hotels often have special rates for Vappu and are centrally located:

For the more budget-conscious among you, try your luck with these properties, which are slightly cheaper, yet in walking distance from all the Vappu fun:

I’m obviously biased because I lived in Turku and experienced all my Vappus there, but I think this slightly smaller city might have a better Vappu vibe! Stay in one of these properties (ordered by price – the first one is the most expensive): 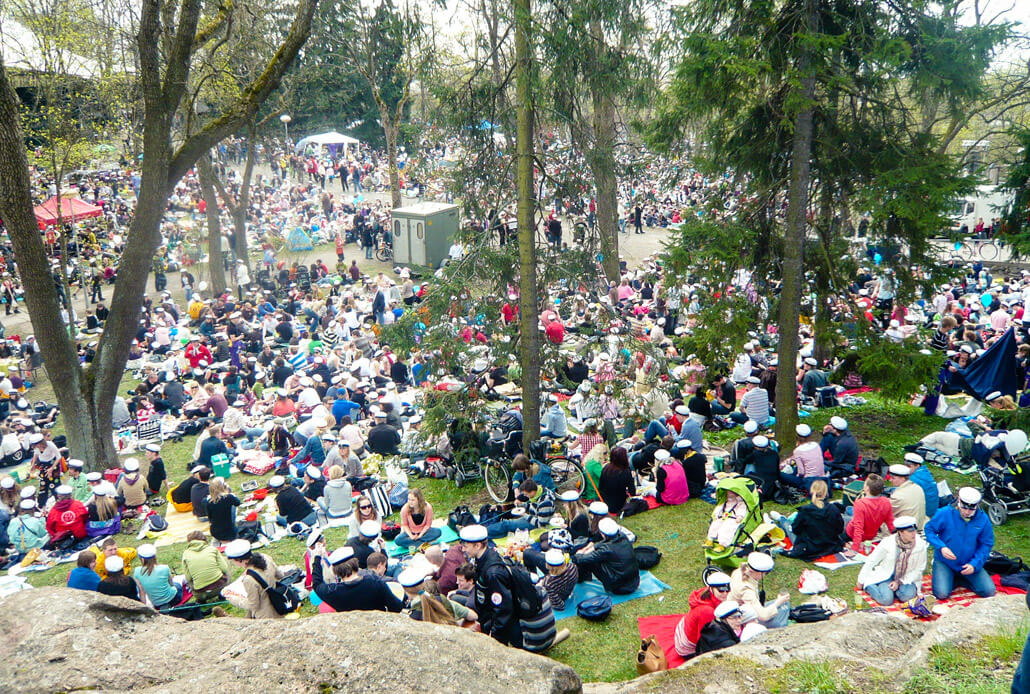 Parks are inarguably the most crowded spots during Vappu in Finland

In 2019, May 1st falls on Wednesday. You can expect the party to start already the weekend before. Most lively city-wide parties are going to happen on the last day of April (Vappu Eve) and May 1st (Vappu Day).

Vappu is inarguably one of the most distinct Finland festivals. If you like a ‘little’ party cheer, you shouldn’t miss out on it!

Visiting Finland in May after the Vappu festivities means you’ll come across a nation with a major hangover :) An important occasion had to be celebrated well and Finns are great at that. In Finland Vappu is almost as important as the National Day (on Dec 6), but it’s definitely more alcohol-fueled.

Apparently, in Sweden there is a similar festival called Walpurgis. It’s probably as much fun as Vappu in Finland! Let me know how it was if you experienced it! 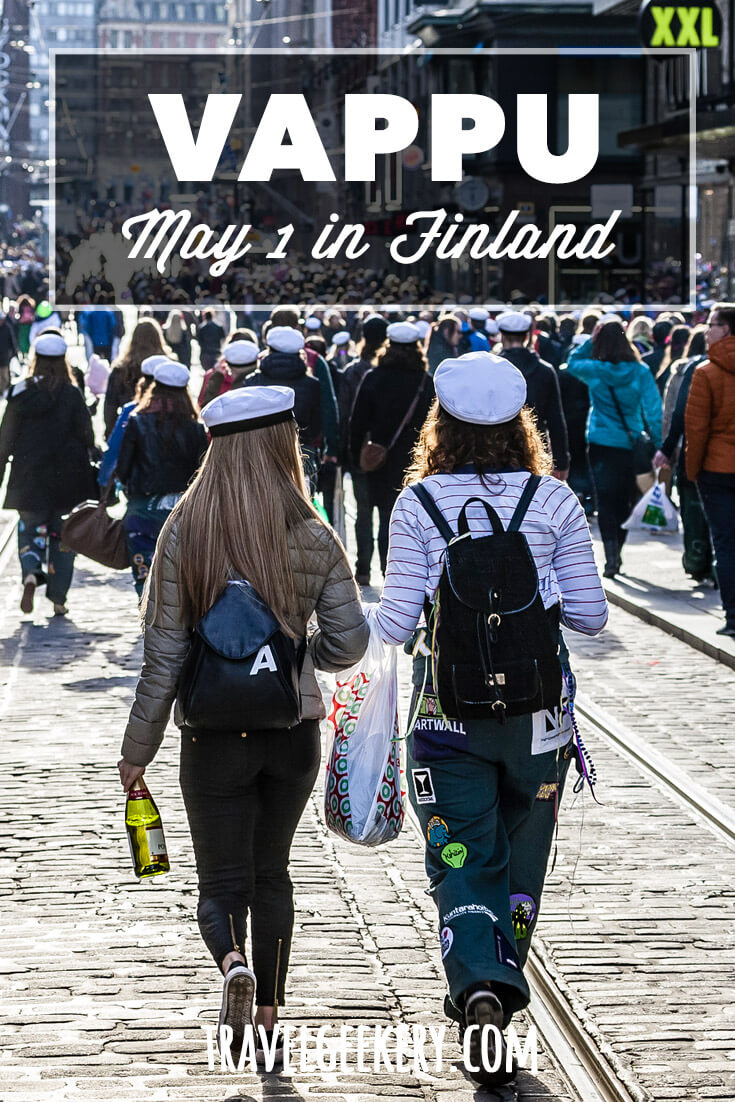 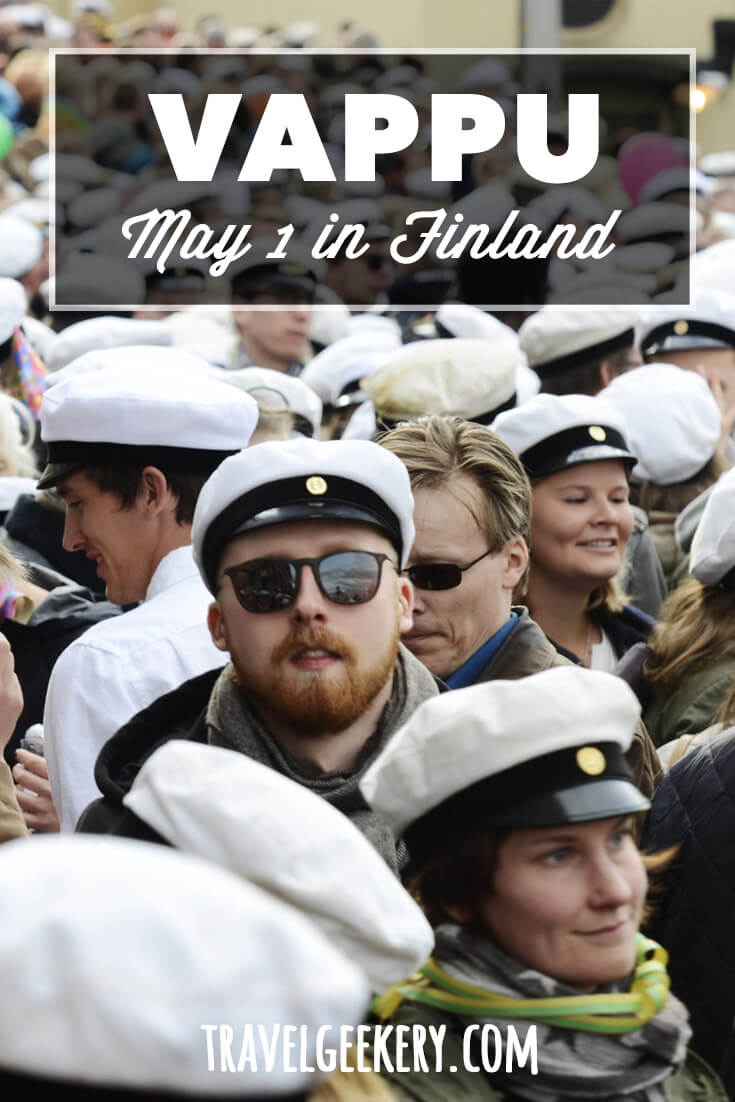 I rent room for international students in Helsinki for a longer or shorter periods.