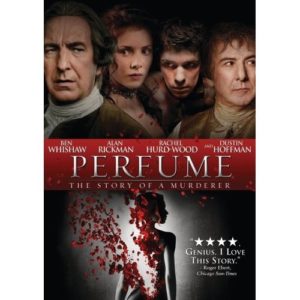 Have you seen the movie Perfume: The Story of a Murderer?

The young Jean-Baptiste Grenouille starts to discover the beauty of scents and perfumes in Paris and later comes to learn the full craft of enfleurage in Grasse, the world’s perfume capital.

The story is based on a 1985 novel by a German writer Patrick Süskind. In his youth, he studied in Aix-en-Provence and the nearby city of Grasse became his inspiration for the novel he published 40 years later.

Odors have a power of persuasion stronger than that of words, appearances, emotions, or will. The persuasive power of an odor cannot be fended off, it enters into us like breath into our lungs, it fills us up, imbues us totally. There is no remedy for it.

Only a very few of the Grasse movie scenes were actually really shot there, but once you walk the narrow lanes of the old town, you’ll feel like as if it was all shot in Grasse.

The city posing as Grasse was Spain’s Girona and the director Tom Tykwer made sure Girona paid its original brethren justice by visiting Grasse before the shooting started.

It’s not clear which scenes were made in Grasse, but if you approach any of the little perfume store owners, they’ll assure you this or that scene was shot right by their porch.

Once you’re there, don’t forget to pay a visit to one of the most important perfumeries (Fragonard, Molinard, Galimard) and take their tours. You can learn a great deal about perfume making in an entertaining way.

Getting lost in the old town of Grasse will make you feel like you’re a character of the movie, luckily without the crazy murderer around!

If you’ve seen the movie, did it make you long to explore Grasse and Cote d’Azur? If so, I’d love to hear about it!

I read the book, I saw the movie, then I was in Grass. I fell in love with that beautiful picturesque small town! Yes, I felt like a character of the story!

Missed you at TBEX North America! Didn't even know about this movie but will try to find it. I think Tom Tykwer was one of the directors in "Paris, Je t'aime"!

Hi Janice! I only went to TBEX Bangkok, no America for me this year :) I hope it was great! The movie is really special, let me know how you like it!

The cabinet of curiosities | Emma Lawson

[…] instead of sinister and the music continues the feeling of delicate innocents through out the film.https://www.travelgeekery.com/following-perfume-murderer-grasse/ – perfume the story of a murder While this film is one of the newest released among this […]

[…] are set here! Even though the actual shooting was done in many other places. I wrote about it here. The streets are beautifully winding around nice little squares with a large number of galleries […]