The lunar New Year and the extended holiday, called the Spring Festival, is the most important holiday in China and many other countries in Asia. A few years ago, I had the chance to spend it with a family of one of my dear Chinese friends, in a little town of Pingnan, in China’s Guangxi province (the province that borders with Vietnam). There were no other foreigners in sight, only my Canadian friend and me. Adventure time!

Although the Chinese celebrate also the New Year as we know it in the West, they follow the lunar cycle as well. Wikipedia says that the Lunar New Year marks the start of the new year, beginning on the second new moon after the winter solstice and ending on the full moon fifteen days later.

The name Spring Festival then comes from the original Chinese name.

It all starts with the preparations for the Festival. Everything must be perfectly spotless and clean. On the New Year’s Eve, the extended family gathers and enjoys a dinner together and family meals continue throughout the whole holiday, depending on the availability of all members. This could mean quite a few family visits!

Houses and apartments are decorated with red and yellow paper cut outs as well as lanterns, and usually little offerings to Gods – think durable veggies and envelops with cash left on the porch. 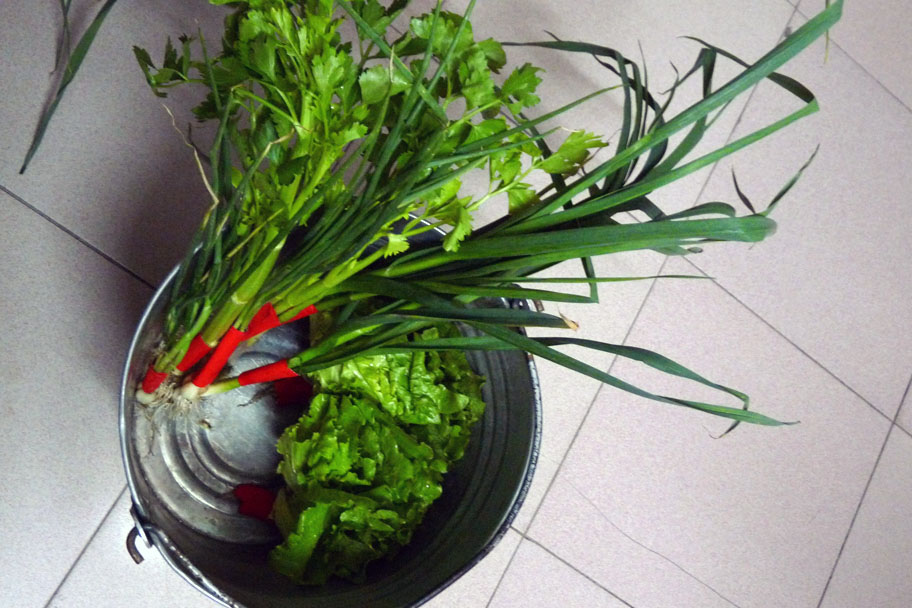 Vegetables wrapped with red paper to make sure Gods can recognise what’s left for them.

During this time people also remember their deceased relatives by burning incense sticks. Paper money is burnt to ensure prosperity for everybody in the family.

It’s very important to chase any evil spirits away. How does one do that? Well, the Chinese recipe is firecrackers – the louder the better!

[Tweet “Chinese secret to chase off evil spirits during the Spring Festival is firecrackers – the louder the better!”]

Entire cities are decorated quite heavily and all shops are closed during the holiday. Lion dances are the best thing to watch outside during this period! The lions go through the city and visit shops and houses, try to ‘eat’ prepared veggies and red envelopes and make a show. Every business owner is happy if the lions stop by their shop, as that usually means a good fortune can be expected. At some places there might be dragon marches too, but I haven’t seen any of those. 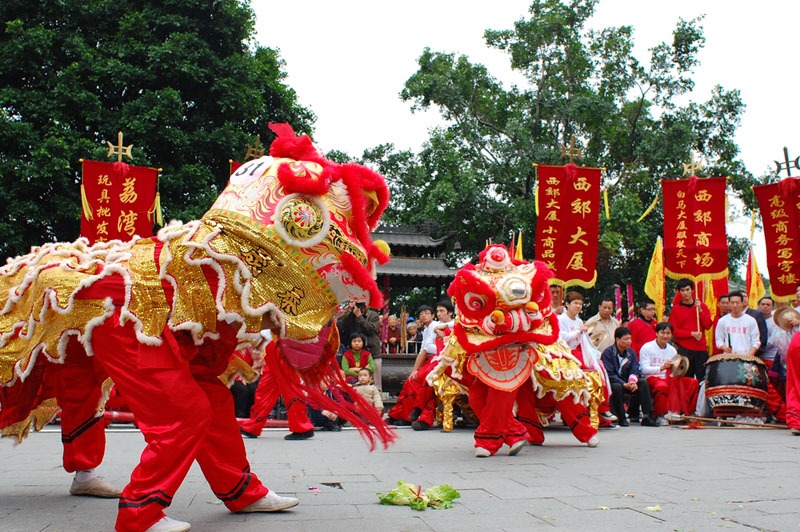 Lion dance at a square. They’re supposed to get hold of a vegetable that’s usually hanging somewhere. Here, apparently, it fell.

My experience with the whole Spring Festival was interesting. I expected a lot to be happening around the city but this holiday is mainly about visiting relatives, going to the cemetery and relaxing at home. I arrived after my friend’s family thoroughly cleaned their whole 4-story house, and had visited some relatives, so they were in the relaxation stage. We paid another visit to other relatives, walked through the city, saw some lion dances and then went to a nearby temple. That was basically all.

Other than that, we watched some special shows on TV…over and over again. As I couldn’t understand Chinese well, the time seemed to pass very slowly and the cold, humid environment made for a grumpy me. My friend’s family was incredibly nice and they even placed heaters in the living room to help us feel a little warmer. My Canadian friend and I were still pretty cold though. I guess we had been a little too spoiled in our lives :) In the South of China, there’s usually no heating installed in houses, buildings get quite cold during wintertime and it’s very common that locals wear layers (incl. jackets) indoors.

Each morning I was awakened up by the horrible sounds and smells of firecrackers as early as 5am as the neighbors took special care to chase off their evil spirits ;) 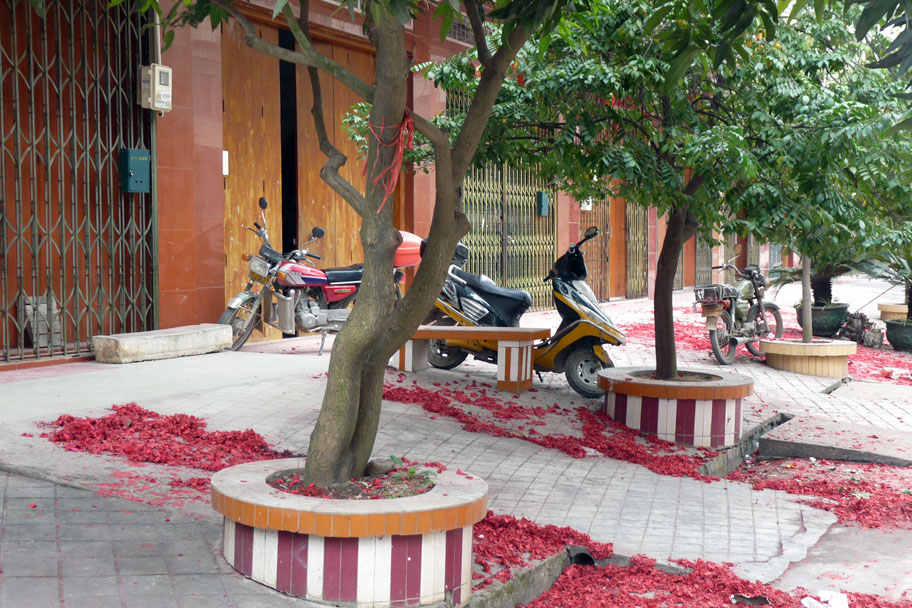 This is what’s then left all over the streets from the firecrackers..

The porch of our house was decorated with special type of decoration depicting the animal whose year it was going to be. Add plenty of red-colored paper cut outs and a tray where food was put in order to please the Gods, and you’ve a got a well-rounded Spring Festival experience. 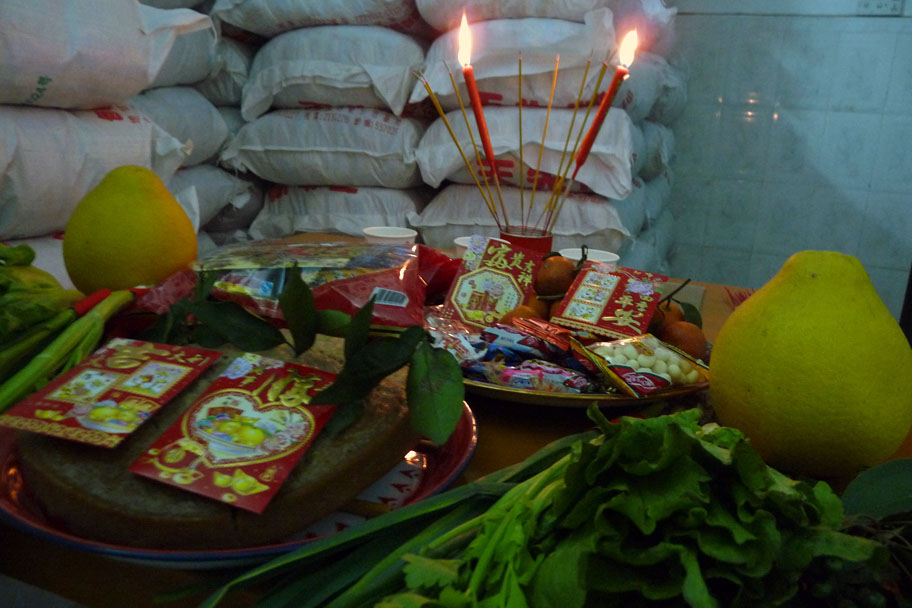 Offerings to Gods.. veggies, fruits, sweets, and some money in envelopes!

So what did we do most of the time? Fortunately, my friend had several Big Bang Theories on her computer, so we watched at least 4 seasons – that was in no way part of the tradition, of course! We’d prepare lunch and dinner and clean the dishes. Sometimes we went to a restaurant and enjoyed some dumplings, another typical dish that can bring good luck. See an overview of the typical Chinese New Year food here.

Before we left, my Canadian friend and I were presented with red envelopes containing banknotes. There was a lucky amount of cash in each envelope, in order to protect us on the road, bring us luck and to wish us Happy New Year. It felt like we were part of the family, despite the fact that we couldn’t chat with the parents at all!

If you have an opportunity to travel to China during the New Year and Spring Festival holiday, try to stay with a local family. If that’s not possible, avoid travelling during that period at all. Most of China’s huge population moves during the Spring Festival and believe me, plane/train/bus tickets are booked a long time in advance and even if you get a free spot on one, the travel will be far from pleasant.

In 2015, New Year’s Eve falls on February 8, and it’s the Year of the Monkey! May it bring all the luck and prosperity you need ;)

For those of you interested in more festivities in China, check out how I spent Christmas in Chengdu, Sichuan province.

Do you love Pinterest? Good, we do too! Here’s a pin for you! 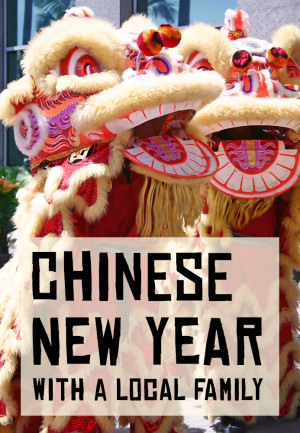 Hi! I happened to pass by your blog and would like to ask a qns! Is it okay for a Chinese to spend the first few days of the CNY with friends/Girlfriend/Boyfriend? I heard that it must be together with our own family and not anyone else. Any taboos or traditions regarding this? What will happen if we spend the days overseas with someone else instead of our own family members? I’m just curious, thanks!

Hello Faye, thanks for reading and commenting :)

Well, my Chinese friends would go back home to spend the whole Spring Festival with their families. That's the default. It then depends on their agreement if they can sometimes travel instead. Some of my friends have more recently (rather than during university years) started rather travelling abroad for the New Year, but it usually comes with their parents consent, sometimes a bit involuntary :) So that's my experience... The simple answer is: it depends. Hope that helps a bit!

"In the South of China, there’s usually no heating installed in houses, buildings get quite cold during wintertime and it’s very common that locals wear layers (incl. jackets) indoors."

AHAHA, OMG, I have felt this so badly. I lived in Guangzhou for 3 months ... in winter. And it was unbelievably cold for me, despite being 7-15C (way warmer than Sofia in winter), but minus the heating and plus the humidity, it felt insanely cold.

Did you know I did some push-ups, squats, and dances on the roof of the building to keep myself warm? haha

I really love how they put all their laundry on the balcony on the day before NY's, so it's clean and fresh.

And Guangzhou was teeming with flowers!

Thanks very much for this lovely article!

Thanks for such a nice comment, Svet! I see you can relate, hehe. Did you wear the sleeve protectors on your winter jacket too? :) It's such a Chinese thing :) Good one with the workout to keep yourself warm! I used my A/C for the heating and then almost fainted from the electricity bill :D

So much preparation goes into these Chinese festivals that a relaxation period seems absolutely necessary. What a great experience for you.

Lovely photos. We also enjoy a lot during Chinese New Year as our city Calcutta has the only Chinatown in India.