Have you seen pianos in the streets when you’ve travelled the world? Have you ever sat down and played?

I became curious about who first started the idea and how it spread all over the world, including the Czech Republic. And I’ve found the story too fascinating to keep to myself! :)

The idea is simple: You pass by a piano that someone put in a public space, feel tempted, sit down and play while a small crowd of people gathers around to listen. This is the case when you actually know what you’re doing when tapping the piano keys. In case you have no clue, you might be on the other side of a piano, among the naturally formed audience.

At the beginning, there was a piano that one family in Sheffield, England, didn’t have a place for so they kept it on the street and invited people to play. It generated quite some interest.

The origins of the bigger-scale piano ‘movement’ date back to 2008 when the project “Play me, I’m yours” started. An artist named Luke Jerram began installing pianos on the streets, in Birmingham, UK, and it later expanded to the whole world. The aim was to add some life to public spaces and to create lively meeting points for friends and strangers alike. 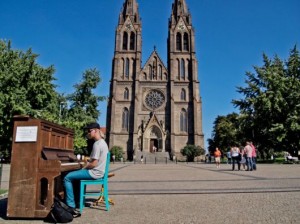 Although the “Play Me, I’m Yours” project mostly travels from city to city, many local communities embraced the idea and keep pianos in public locations all year round. One such occurrence happened in Prague – a café owner who engages in public activism, collected money via the Czech version of Kickstarter and has installed pianos around Prague and a few other Czech cities. Each piano has its own custodian who locks it for the night and makes sure it’s all right. People volunteer to take care of the pianos. In fact, many of the caretakers are local homeless people. Inspiring, isn’t it?

The Prague pianos became famous after a video of an on-duty policeman playing one went viral on YouTube and appeared on BBC and other news sites. I’m sure you’re dying to see it, so here you go:

Fortunately, the policeman didn’t have much trouble afterwards, as his boss, when asked, publicly stated that he significantly contributed to a positive image of Prague police.

One could say the pianos in the streets not only do good in terms of connecting people in the real world again, but also the project has got quite an ecological aspect. The pianos used for the project are often ones that are close to being thrown away. You know, the cumbersome type that you wouldn’t find in your local music store anymore.

I always love the feeling when I’m walking down the street and my ears catch a slight piano melody. My feet then naturally change their course and carry me to the source. Such a diverse array of people have incredible piano playing skills that you wouldn’t necessarily expect from them – from young students to old homeless men…!

We all need more music in our lives, don’t we?

Next time you see a piano in a city you’ll travel to, stop by to play or to listen to the melodies of local musicians. It’ll make your day!

Funny i found this article today as i've seen my share of public piano playing lately, mostly in train stations. There is a piano in Pancras Station in London (the Eurostar station) and there was a man playing when my kids and i were waiting for our train. In Paris Gare de Lyon in Hall 2 (the TGV station) there is also a piano and the SNCF (the French railway network) has got a contest at the moment. You sit down and play, record your performance and you could win an actual piano (there is something about the contest on their website if you're interested). Thanks for the little history, although i lived in Birmingham, UK for 3 years and i have never seen a piano in a public space, maybe i simply missed it or didn't check the right place

Play Me, I'm Yours was in Toronto last year in the lead up to the 2015 PAN AM games and it was sooo fun coming across pianos throughout the city and seeing locals (or tourists) playing away! I love this concept!

Loved this! iIwasn't aware of them, but what a great gift to encounter. I hope I see one when I visit Prague in 2015.

In the airport where I worked in Belgium, there was a piano in the departure hall. It was great to see passengers using it! And I had no idea how this all started, thanks for sharing that story!!

Thats awesome! I've never seen anything like that before! Sounds very European. Although I don't play piano I'd love to just sit and watch others stumble across it and play a few bars. Sounds like a great community project. Thanks for posting!