When I first considered Cambodia as a destination about 3 years ago, I imagined that all places except Angkor Wat would be barely visited by tourists. I pictured pristine nature and empty beaches, smiley locals and lots of wildlife… Here’s what I actually found:

I stayed at the very end of Otres Beach, near Sihanoukville, in one of four bungalows that were only 2 years old. The bungalows were built with no other accommodation in sight, but as of today lots of places to stay emerged on both sides. My hosts kept the area beautiful and non-commercialized, however big business took off all around and you could soon start to see other hosts with their many bungalows crammed to each other, just to maximize their ROI.

I’m Czech and I wasn’t pleased when I heard two people swimming in the beautiful turquoise water, complaining in my mother tongue that it wasn’t any better than a lake back in the Czech Republic. 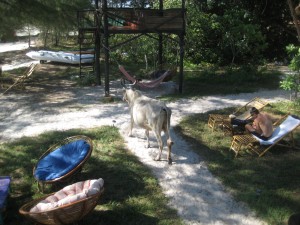 I also heard about one of the bungalow communities at the beginning of the Otres Beach area. The calmness of the place during the day gives the impression it’s going to be a wonderful peaceful area to stay in. Guess what – it’s that calm because the guests have been partying all night and instead of enjoying the ocean, they’re trying to sleep through their hangover and prepare for the next night’s loud partying.

On the way from Sihanoukville to the Otres beach (you can take a scooter or a car taxi), there’s a strip of slums – a road lined up with shabby shelters. Not many locals live there full-time, though. Most of them managed to find a job in a city, but they continue to keep at least one family member there to collect the social allowances by aid organizations. It’s their way to profit from the system and provide for their families.

The beaches are still very pristine and empty, though. Trees often grow on them and make them look even more unique. Plus, the quantity of various seashells is unbelievable!

Occasionally, water cows find their way to the beach and wander around the bungalows that have no fences. They are harmless and actually fun to watch.

I saw somebody riding a scooter, right on the beautiful sandy beach! Fortunately, it’s quite rare and even the locals condemn such behavior. 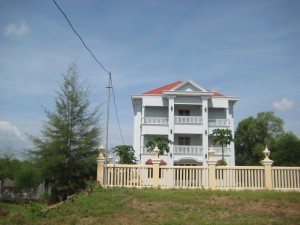 I haven’t seen much, but the cities generally seemed a bit dirty and not so well kept, which is especially true about Phnom Penh. In my opinion, Sihanoukville has more character. There are also some touristy things you can do, like visit a local little ZOO and feed the monkeys. Phnom Penh has all the headaches of a big city with high amounts of poverty, which means you’ll find street kids begging for money or selling some occasional souvenirs. It’s always a dilemma whether to buy from them or not, one is not helping in either case.

Around the cities, you’d find big investment projects, which are sometimes hard to believe that they’ve been approved – e.g. big casinos and big luxury hotels that might never be finished.

One building that struck me as being outright unnecessary was a 3-storey pigeon house – a concrete building in the middle of nowhere that used some sound to attract pigeons. The pigeons were somehow collected there and then sold.

If you’re going to visit Angkor Wat, expect crowds of people. But then again you weren’t thinking it would be deserted, right? If you manage to stay away from the big Asian groups, you’ll be fine. For Angkor Wat, or any other sights actually, this basic rule holds true: Come as early as possible and you’ll see it at its best with the least people. The temples further from Angkor Wat are also worth exploring and there are enough of them to keep you occupied for a few days.

Exploring remote areas of Cambodia is a totally different thing. You can find friendly locals, who are hard to communicate with of course, but the more honest and authentic. In places where tourists are not seen on daily basis, you’ll be treated with a welcoming attitude. In the smaller villages that you’d come across, you can meet happy children and their families, who will on the contrary not ask you for money or anything, and will be just glad to take a photo with you.

Cambodia is often compared to Thailand as it was 10 years ago. The beaches are beautiful, but the chaotic development takes its toll. The local governments often prefer developments that provide a lot of income over solutions that would be more sustainable to the local communities and nature. The country doesn’t have it easy, given its troubled past. Let’s hope it’ll soon find its own way of sustainable development!

Have you been to Cambodia? I’d love to hear what impression you’ve had!

[…] back when I went there myself, Cambodia was already changing. Today, you’ll come across a popular destination with good tourist infrastructure. But […]

It is amazing infomation to help us discover Cambodia.Thank for your sharing

I just traveled to Cambodia 2 months ago, I went to Phnom Penh first, then traveled by plane to Siem Reap and visited Angkor. In Phnom Penh there is a beautiful Royal Palace, but coming to Siem Reap is really an unforgettable experience for me.

I found it had changed a lot between 2010 and more recently. People are a bit more pushy now and you aren't such a novelty. The banana pancake trail continues...

Thanks Edwina! That's great to meet local travellers exploring their own country..! I love that. I definitely want to go back and dedicate more quality time to this amazing country. Thanks for stopping by..!