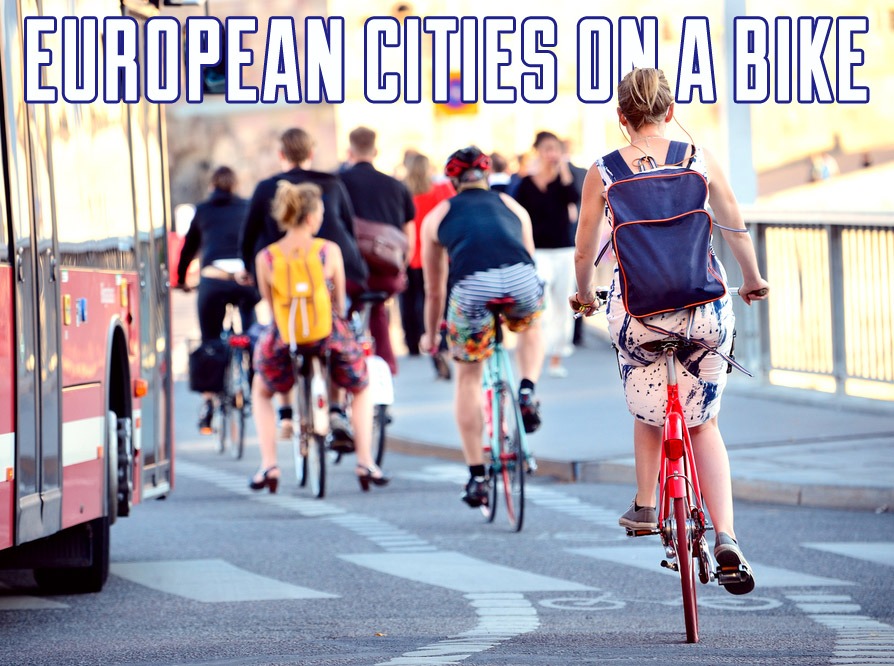 Who wouldn’t love cruising around a beautiful city, enjoying the sights, getting to places faster than on foot and sparing their feet of the whole day walking regime. A bike is a great mode of transport, unfortunately not all cities in Europe are adjusted for bikers. Here are a few that are great for biking, though:

Amsterdam is inarguably the best city to get around by bike. Locals are used to roaming the city on their funky bikes, zipping over tiny bridges and artfully avoiding passersby on narrow roads. There are plenty of biking paths that wind through the city and bike rentals are plentiful. Amsterdam regularly tops all possible lists of bike-friendly cities and it’s no wonder. Biking in Amsterdam is as mainstream as it gets and the culture encompasses the entire Netherlands for that matter.

You can read some important tricks and safety tips on cycling in Amsterdam right here.

Copenhagen has a great infrastructure for the cyclists. However, it seems the current government is leaning towards preferring cars. We’ll see how it goes but certainly what they’ve built is impressive and you can get around the city on a bike very easily! Copenhagen’s strong tradition of cycling has been demonstrated also in a relatively new invention – The Copenhagen Wheel, a device that can be attached to a bike’s wheel and power you up when going up a hill. More info here: www.superpedestrian.com

Stockholm possesses a large variety of bike paths and lanes. They even go over the longer bridges, as one wouldn’t expect. The scenery is beautiful and you can easily cycle through parks as well. Of course the best time to get around on the bike is during the summer, but in the winter you’ll find locals riding on snow and ice as well.

I tried Stockholm City Bikes and had a lot of fun cycling along the canals. As of 2018, they however closed their business in Stockholm.

What’s up with all the Scandinavian cities, you ask? For one thing, they are usually pretty flat. Another is, they’re more environment-conscious than the South of Europe (at least in my opinion). Helsinki is definitely worth exploring on a bike. You can cycle along the harbor, throughout the city center, or across its big parks.

The best area for cycling in Nice is definitely the promenade. The long coastal strip offers stunning views of the sea and to have the sea breeze cool you down on the bike is just delightful. The local authorities have been increasing the efforts to make the city more bike-friendly and you can easily see that. Bike lanes are on almost every road. You can even bike out of the city too – I found some useful advice here.

Berlin can be easily counted among the most bike-friendly cities. Although a bit chaotic and inconsistent, the bike trails network is there and it’s been expanding. It’s common for riders to take their bikes on to the public transport and the S-Bahn has even special seats for bikers.

Getting around on two wheels will allow for stunning views of the Geneva Lake. Cycling paths populate the city centre as well as the countryside. [Tweet “Did you know you can rent a bike for free in Geneva? For 4 hours!”]Did you know you can even rent a bike there for free? No kidding! Here’s more info on how to get a free bike for 4 hours (every hour over 4 is priced at only 1 Franc): www.geneveroule.ch

When you’re backpacking in Europe in one of the above mentioned cities, give your feet a break and jump on a bike!

I included mostly cities that felt like bike-friendly to me. However, if you’d like to explore the topic further and get to know the official results of cities ranked by their bike-friendliness, then here’s a great source for you.

What other cities do you think should be listed among the most bike-friendly?