In the US press mainly, Berlin is no longer the new cool kid on the blog. You ask why? One Berlin club, Berghain, is not as good as it used to be and the rents are climbing. Having lived in Berlin and visiting it regularly to this day, I don’t agree with disgracing Berlin for losing its cool. In my opinion, Berlin still is the coolest place on Earth.

Berlin is a pulsing, exciting city with so many varied and distinctive neighborhoods, iconic history all around, great food at all levels and from every corner of the world … an excellent place to set up camp and make a great record.

– R.E.M. during recording their album in Berlin in 2010 (Source: rollingstone.com)

Let’s get to the actual reasons why Berlin is still so cool:

Let’s face it – a bigger ratio of hipsters (both with and without beards) makes a city cool. Although they usually don’t contribute much economically, they do have a style and a unique approach to life.

Berlin’s ‘Silicon Allee’ is one of the hottest startup hubs. The city has been trying to attract starting businesses and aspiring entrepreneurs and has so far been very successful. There are several accelerators, numerous startup events and hackathons. The biggest success story has been Soundcloud and hopefully more are to come.

Berlin is the city of students. There’s the famous Humboldt University, as well as many other local universities. Students give the city a cool flare and there’s no better way to prepare for exams than studying on the lawn by the Spree river (with an optional cocktail in hand)!

English is spoken everywhere and the locals are used to it. Many expats live there, from artists to doctors to engineers. The Turkish community has also made a dent in the Berlin universe with their yummy kebabs.

The cafés in Berlin are really unique. Especially in the area around Prenzlauer Berg, you’ll find many stylish cafés with great atmosphere and people either chatting away or busily working on their laptops.

Berlin is the city of art galleries. You can find so many interesting little art studios! I personally like roaming the streets around Oranienburger Strasse to explore the diverse art scene. Although the famous Tacheles house was closed down in 2012, it lasted pretty long despite the controversies. 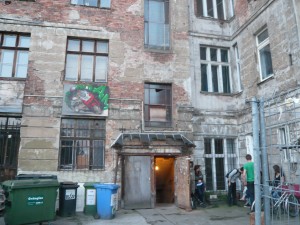 Pop-up club: Not your usual party venue, but the atmosphere rocks!

Clubs in Berlin are awesome. Even though Berghain fell from its imaginary piedestal, there are still plenty of cool clubs around the city, be it the official ones or the pop-up clubs in abandoned factories and cool spaces.

You can spend days walking around Berlin’s parks. Most of them feel rather natural, with not too obvious flower mosaics or detailed trimming. In one of the biggest parks, Tiergarten, you can even sometimes see people sunbathing naked!

You can drink all kinds of German and international beers, be it in pubs or in beautiful biergartens! Grab a half-liter glass of foamy beer and a pretzel and enjoy the real German atmosphere. What’s more – you can even bring your beer onto the public transport! It’s allowed! 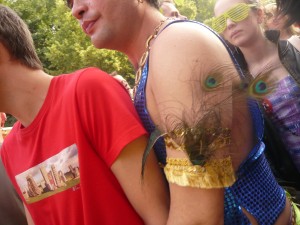 In Berlin, the gays, lesbians and transvestites are not pushed to hide their true selves. Berlin has one of the biggest gay events in Europe, with the first Christopher Street Day dating back to 1979!

The yearly film festival represented by the iconic Berlin bear stands among the most important film festivals of Europe. Don’t expect a Cannes flare, though. Visitors to this festival are primarily interested in screening of the movies, yet occasional celebrity spotting can happen.

Especially the summer season offers endless festivals and events in outdoor venues. From Festival of Cultures to various Food Festivals, you’re not likely to lack opportunities to spend time outside.

Flea market tradition has been well rooted in Berlin. Each weekend, several big Flea Markets sprout up around the city. You can shop for antiques or buy all kinds of horrible items; in any case checking out a flea market is a fun weekend activity!

Ok, really low prices are a thing of the past, but still the properties are priced far below the likes of London or Paris. Artists are often able to find a great rental studio for a fraction of price they’d pay in other major cities.

Go see yourself if Berlin is the right fit for you. One thing is sure – Berlin definitely shouldn’t be left out if you’re planning a trip to Europe!

Have I missed anything? Can you think of some more points to add?

I'm going to Berlin soon! Looking forward to check some points in your list.

5 Cities I Would Return To | TravelGeekery