Undoubtedly, North Korea it is the most eccentric place containing elements of both the tragic and the comic. This experience completely changed the way I think about society, manipulation and unlimited power. Thanks to this trip, I understand the full meaning of human rights and freedoms.

In contrary to what you may think, it is not hard to obtain visa for North Korea. All you need is to email a copy of your passport to the agency and they take care of everything else from there. Unfortunately and obviously, the only feasible way to visit DPRK (Democratic People’s Republic of Korea) is with the local guides.

Your passports will be confiscated upon arrival and you are left hoping that you see them again at the end of your tour.

1. Always show respect to any portrayal of the supreme leaders

You are not allowed to fold, crumble or dispose of newspapers. Well, technically you can, but only if there are no portraits of the leader. Oh, by the way – North Korean newspapers have pictures of their leaders over every single page! 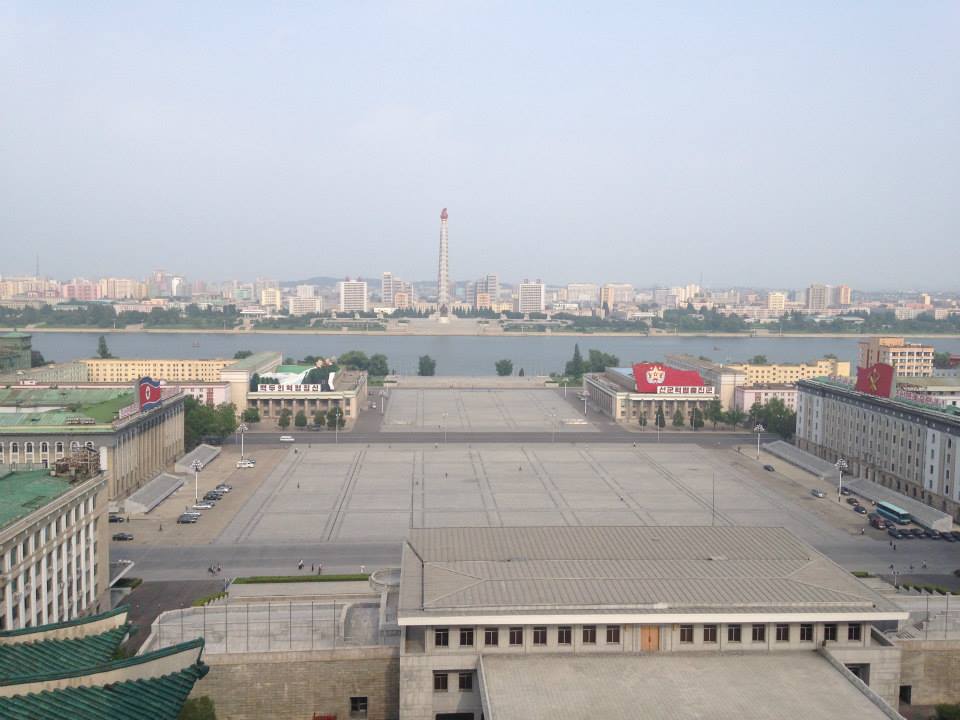 Main square in Pyongyang – the one with the military parades

2. Badges of the leaders do not exist

Every citizen over 17 years old is obliged to wear badges or pins with portraits of their leaders. A powerful instrument to bring the charismatic leader close to people’s hearts. Well, you cannot call it a “pin” in DPRK! It must be solely referred to as “PORTRAIT”…sadly foreigners can’t get them.

3. It is all about the ranks

Kim Il Sung and Kim Jong Il? No one talks like that in North Korea! But everyone knows Great Leader Kim Il Sung, Great General Kim Jong Il and Respected Marshall Kim Jong Un. What does it do to the common narratives you hear everywhere?

“Our great leader, Respected Marshall Kim Jong Un, built these apartments for our people and they were finished in only one year.”

4. Media must be right

According to official western sources, Kim Jong Il was born in Russia. Not true! The local story talks about a double rainbow, a glowing new star and a sacred mountain in North Korea.

Why are there so many insects in DPRK? The story of evil imperialistic West bringing insects into a friendly country explains it neatly. Well, as an Eastern European, I heard that before…

And of course the story as to why Korea is divided is simple too: American imperialists and the South Korean puppet army attacked the otherwise peaceful DPRK. 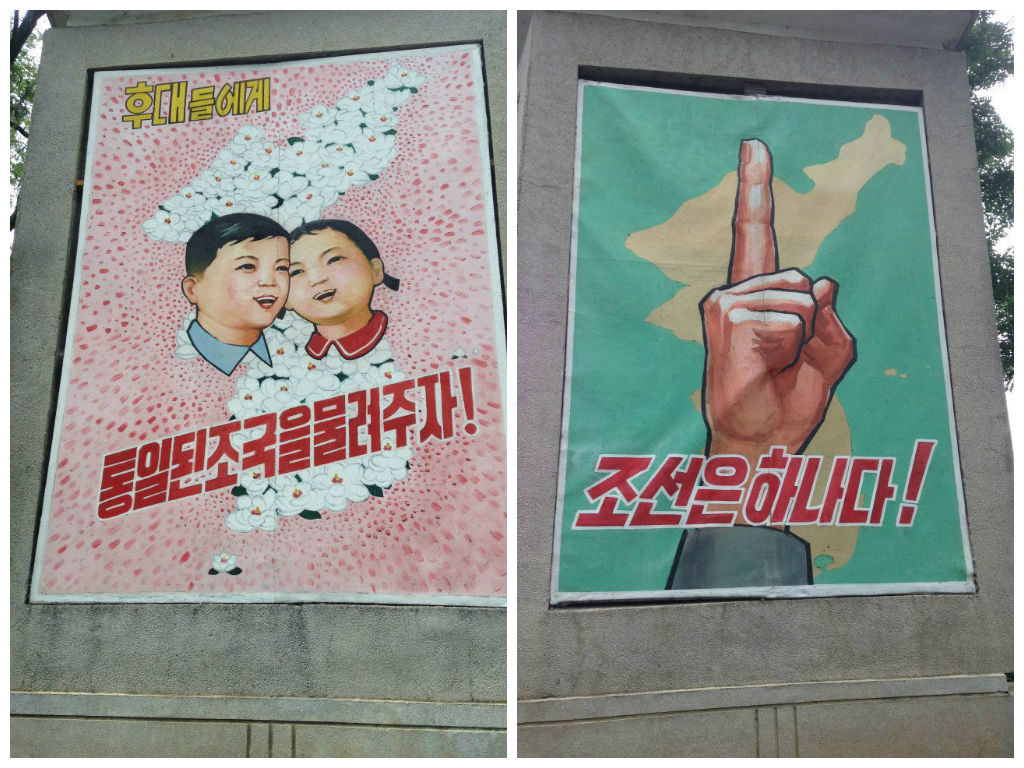 5. Photos? Yes, with only some restrictions

You can take a photo of almost everything in Pyongyang. It does not apply to countryside. You have to seek permission from your guides. And often, you do not get it.  Your pictures might be checked during your stay. It is up to you to believe that your guides are just genuinely interested in photos you have taken. 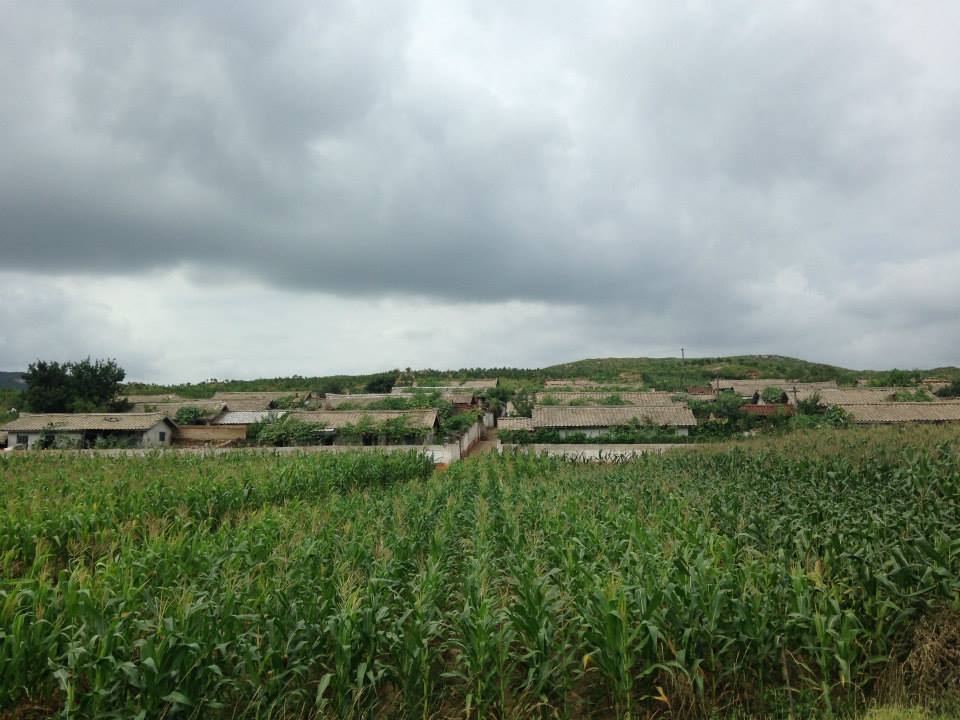 You can see the countryside from a van only. No chance to mingle with locals.

Yanggakdo Hotel is situated on an island in the centre of the capital. You are allowed to venture outside only if accompanied by your tour guides. There is an assortment of several activities but the hotel is mostly empty. Nobody in the swimming pool. Karaoke? Empty. Bar? Hardly anyone there. And one more thing – the fifth floor is missing from the elevator panel. What is on this mysterious floor?

View from the Yanggakdo hotel

Wandering alone is not allowed and therefore you always have to travel with 2 guides and 1 driver. They eat with you and they sleep in the same hotel as you. The only places you are left alone are bathroom and your hotel room (the latter one with a question mark). That feeling of not having 2 pairs of eyes watching you is inexpressible. 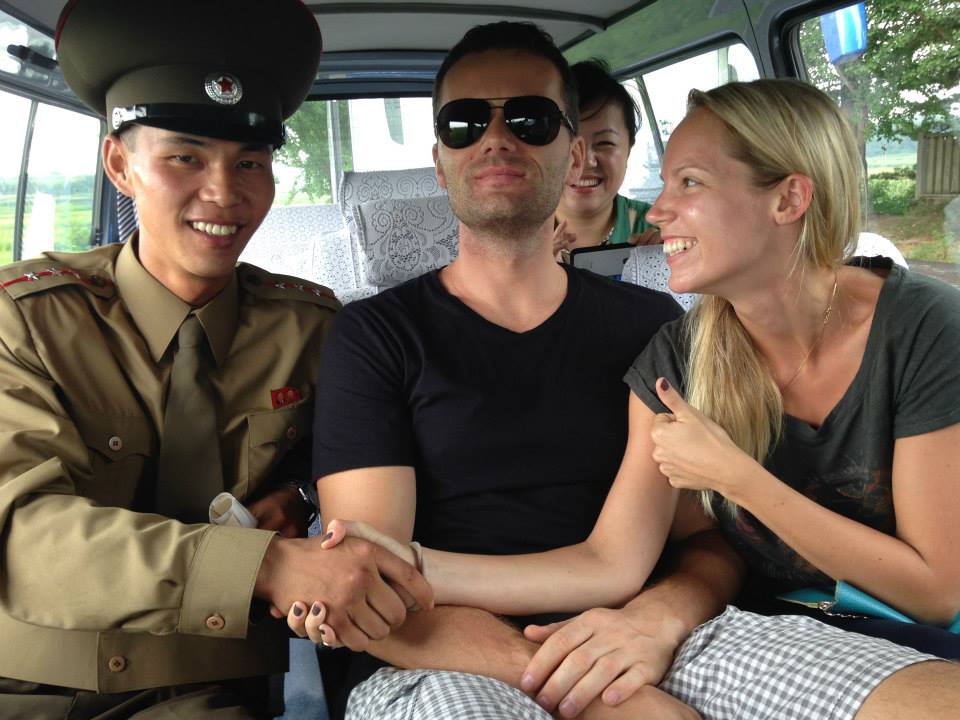 There were birds singing so beautifully around one of the landmarks. Not really, it was a speaker hidden in the bush!

Peoples’ Study House is a monumental library with lectures to show that everyone in DPRK has access to education. We saw things like Anne Frank’s diary translated to Korean, a computer room, a “music appreciation area” where we listened to The Beatles. They even produced some Czech and Slovak books within 30 seconds to showcase the international face of the library. Cover and the first few pages were in Slovak, the rest in English… 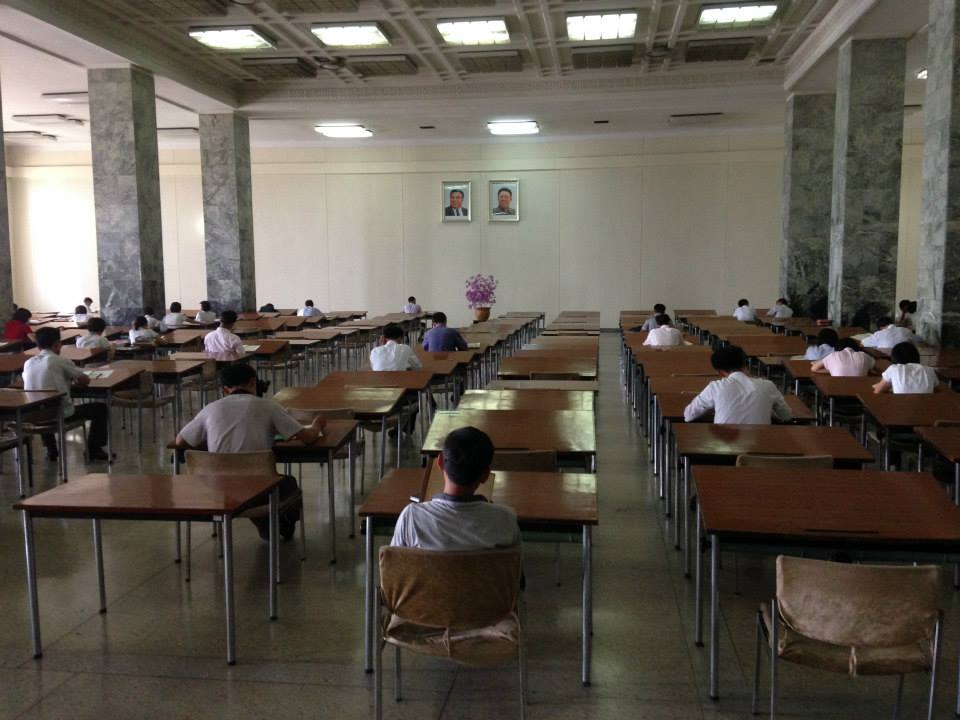 9. See everything and nothing

The itinerary is very busy, you see so many historical places, listen legendary stories about its happy nation and brave and caring leaders. Yet, the only happy faces around belong to the kids. Adults barely show any emotions, they even walk with minimal expressive gestures. It is almost impossible to mingle with locals and any sensitive questions you ask simply won’t be answered. 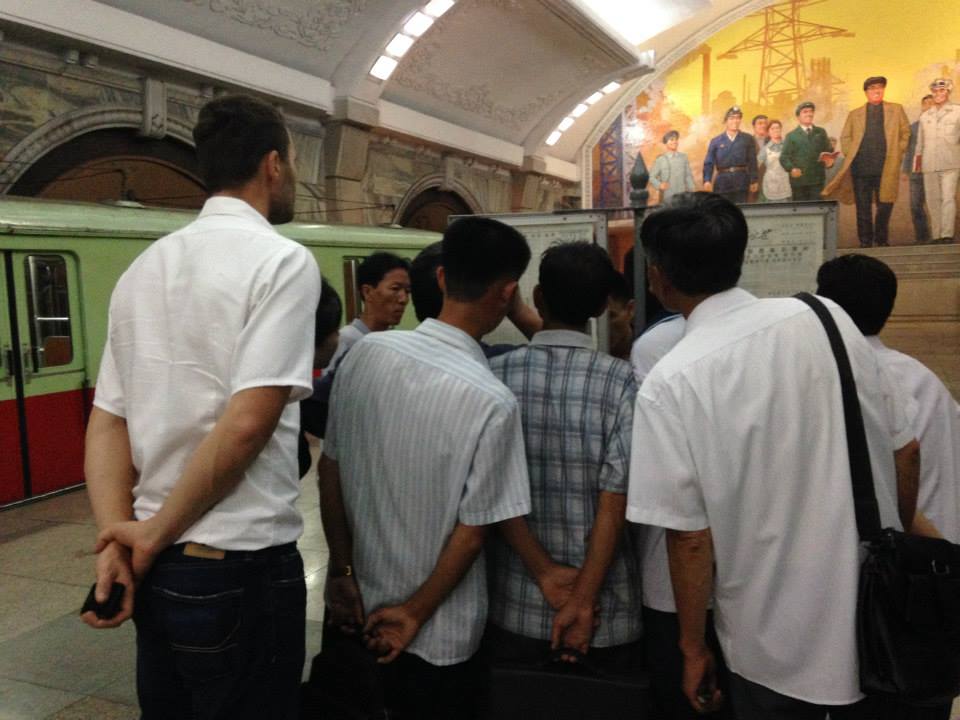 Hearing the glory about prosperous land, renovated buildings under the energetic leadership and warm love of the Respected Marshall Kim Jong Un, who brings into full bloom the idea of love for future generations… you feel you have to do something. See a few rebellion tips of mine:

11. Do (not) pick North Korea for your honeymoon

Oh, I forgot to mention I honeymooned in DPRK. Thanks to my man I got what I wanted – a trip to be remembered :) 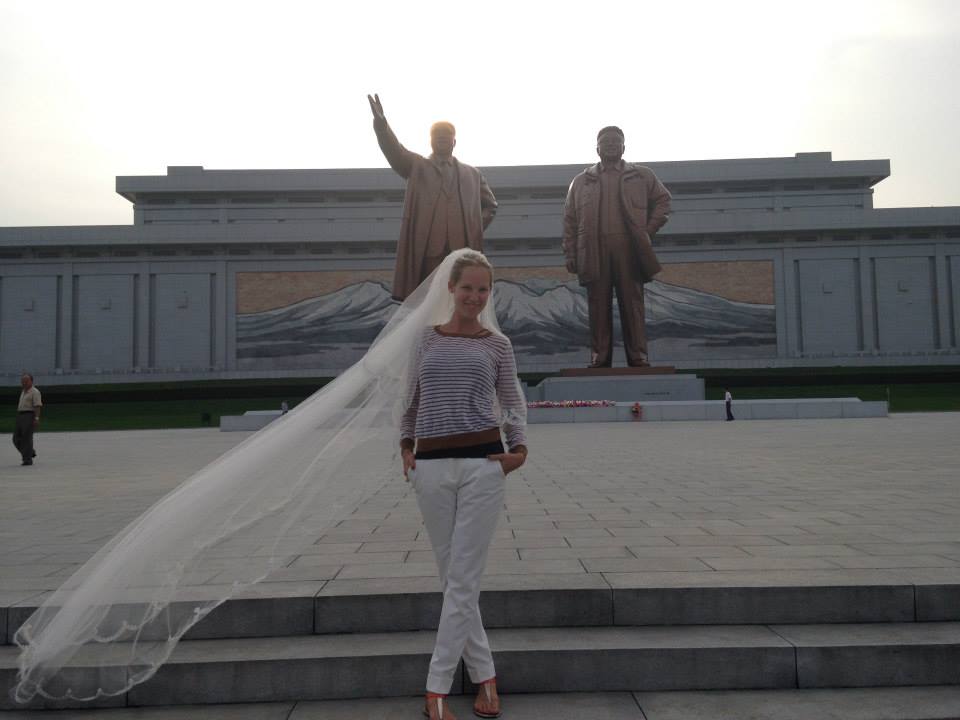 We had to bring flowers and to bow in front of this monumental statue of the Great Leader Kim Il Sung and the Great General Kim Jong Il at the beginning of our trip to show a respect. I got a special permission to take a photo with my veil!

If you want the experience without actually travelling to DPRK, reading Orwell’s “1984” will do a good job.

15 Things to Know About Iran and Its People | TravelGeekery

[…] very easy going, so fear not that you would end up with a government official as if you were in North Korea or […]

I know a lot of people have already used this word, but 'fascinating' really is the best way to describe your article and North Korea in general. I would absolutely love to go there to experience the 'experience' they give you. I found a set of photos online (can't remember where annoyingly!) that had been smuggled out of the country, which help depict the real DPRK. I'd definitely struggle to not push everything to the limit!

wow this is quite incredible... but i wouldn't think of returning there now you've written this post though. Not sure i'd want to go there (and certainly not on honeymoon)... i'd be a bit too scared to be honest so i'll just re-read Orwell.

This is amazing. I laughed at your rebellious gesture! But the post also makes me think about the life of the people living there.

Hehe, I can`t believe you chose North Korea for your honeymoon! LOL! At least it is original and unique! :)

I did not know that they even allow tourists into North Korea. Interesting country, but it seems so stressful and annoying to have those guides with you all the time! OMG, I think I would go nuts. How many weeks did you stay North Korea?