Chances are that you haven’t considered Iran as a must see destination. Who would, right? With the usual negative rhetoric towards the country and its political representatives.. it makes one doubt the safety.

But nothing can be further from the truth. Politics aside, Iran is the most welcoming country I’ve ever been to. So I wrote up a short and sweet overview of what you should know about Iran and Iranians. Enjoy! :)

Here’s a short video of all the things I think you should know about Iran and Iranians. Details are covered later in the article text :)

You can see it everywhere – from shy smiles, to curious questions about where you’re from, Iranians are welcoming to visitors and are generally happy to see travellers coming.

In traditional hotels and houses, they’ll treat you like family and you might even be invited for a homemade meal, just from a person on the street!

No wonder Couchsurfing is so popular there. I haven’t tried Couchsurfing in Iran myself, but have heard the only potential ‘threat’ is that a host might be too friendly and might want to accompany you everywhere.

What a threat, right? 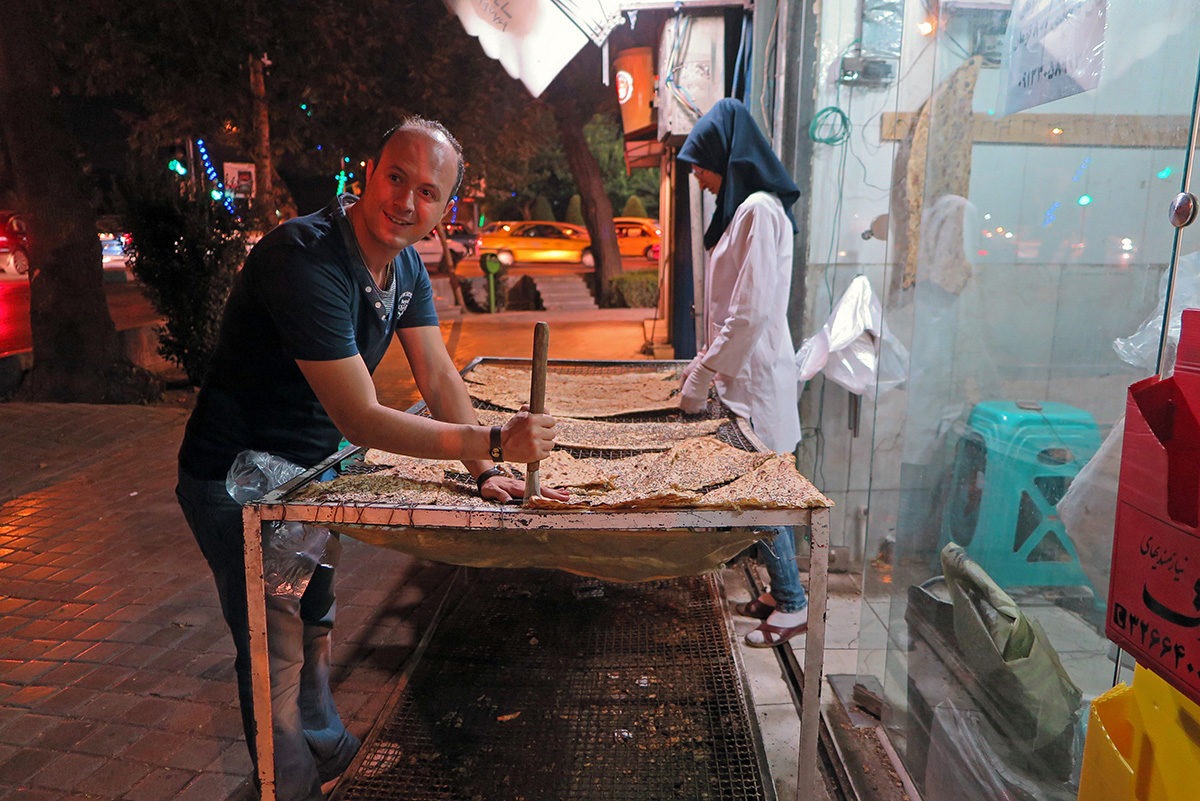 Friendly baker in Esfahan, Iran. Yes, we got a piece of bread :)

Check out also this comprehensive guide on traveling to Iran.

Most Iranians I’ve met feel sad about the image of Iran abroad. Of course, the information they get is a bit biased, but they are always hopeful that you as a traveler to Iran will then tell everyone how great it’s been there!

We were often asked about what we thought of Iran and we always honestly replied how amazed we were by the hospitality of people.

Iran has the bad luck to lie in an unstable region, but it’s one of the safest countries in the area. 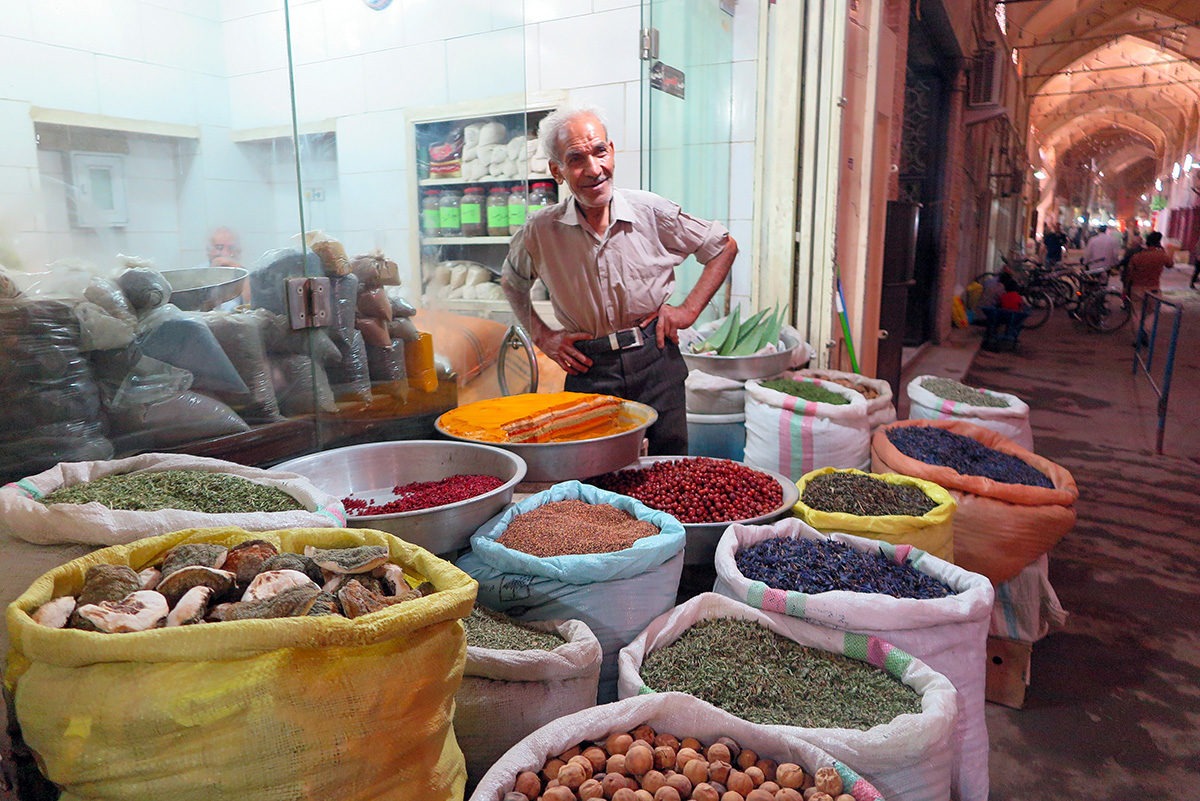 A friendly local in his spice shop.. in a bazaar!

Iran is a safe travel destination

No matter what your nationality or religion, you’ll be perfectly fine. Don’t cause conflicts and follow the local rules and you have nothing to worry about.

The troubled areas of Iran are along its borders with Iraq, Afghanistan and Pakistan. Many travellers are fine in those areas as well, but for the cautious traveler it’s a big no-no.

When it comes to practicalities, visa is supposedly not issued to everybody. For me as a Czech citizen, there was no problem. I could even get an on-arrival visa.

If you already have an Israeli stamp in your passport, get a second passport for your Iranian visa.

If you’re American or British, you’ll need a local guide accompanying you everywhere. Even if you’re Harley Davidson riders, like the Brits we met in Yazd.

Fortunately, the guides are often very easy going, so fear not that you would end up with a government official as if you were in North Korea or somewhere.

Friends playing chess with gaz (local sweets) in Esfahan.. the friendly Iranian who passed by had a sweet tooth and needed a candy!

It’s cheap to travel around Iran

Iran is really cheap for us visitors from the Western world. Even with the high inflation and sometimes-outdated prices in guidebooks, prices are still relatively low.

I’d say perhaps on the same level as in Thailand.

I spent only about 500 EUR in 2 weeks – including accommodation, one local flight, food and souvenirs! 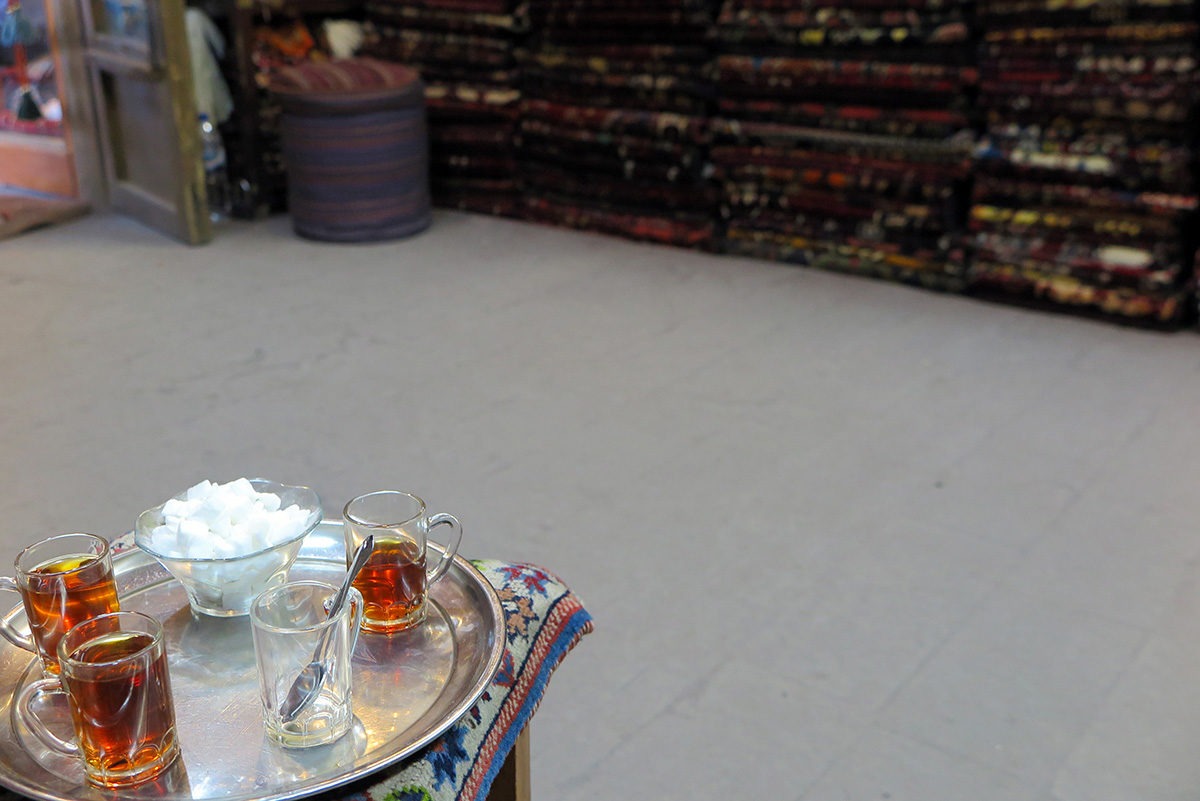 Having a tea at a carpet shop in Esfahan was quite fun and we had a good chat with the owner. Nobody of us bought anything.

Iran is developed and advanced

The infrastructure in Iran runs smoothly and people are well educated. Of course the people you’ll speak to will be mostly those with a good level of English, but that’s quite a big part of the young educated population.

It’s a fact that it takes 10 years to gain a PhD in Iran! So those who study are very serious about it. 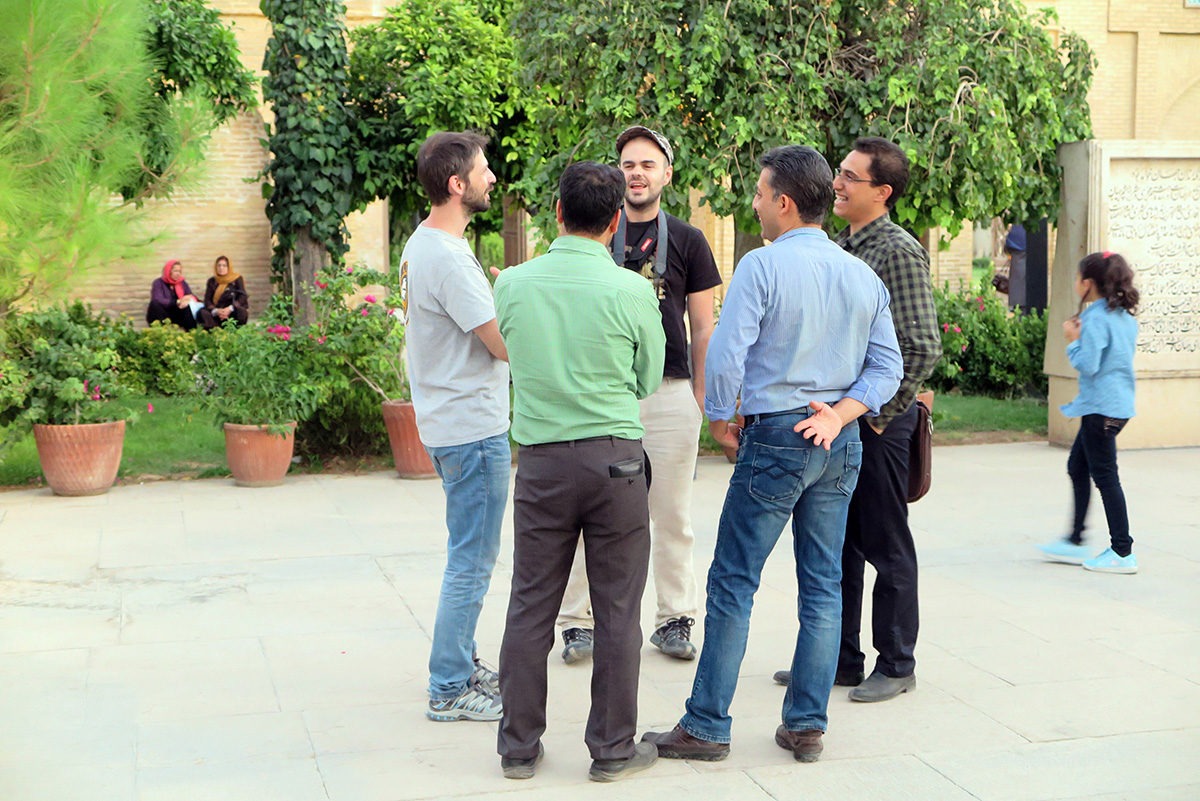 Smart PhD students often came for a chat – this scene is from poet Hafez’ mausoleum, Shiraz.

Iran has been Islamic for only 1300 Years

Ok, 1300 years does sound like a long time. But the Persian culture shaped throughout the times of Persian Empire was not lost, rather absorbed into Iran’s Islam.

It is therefore a bit different to regimes in the neighboring countries, not only because Iran’s population is predominantly made of Shiite Muslims. 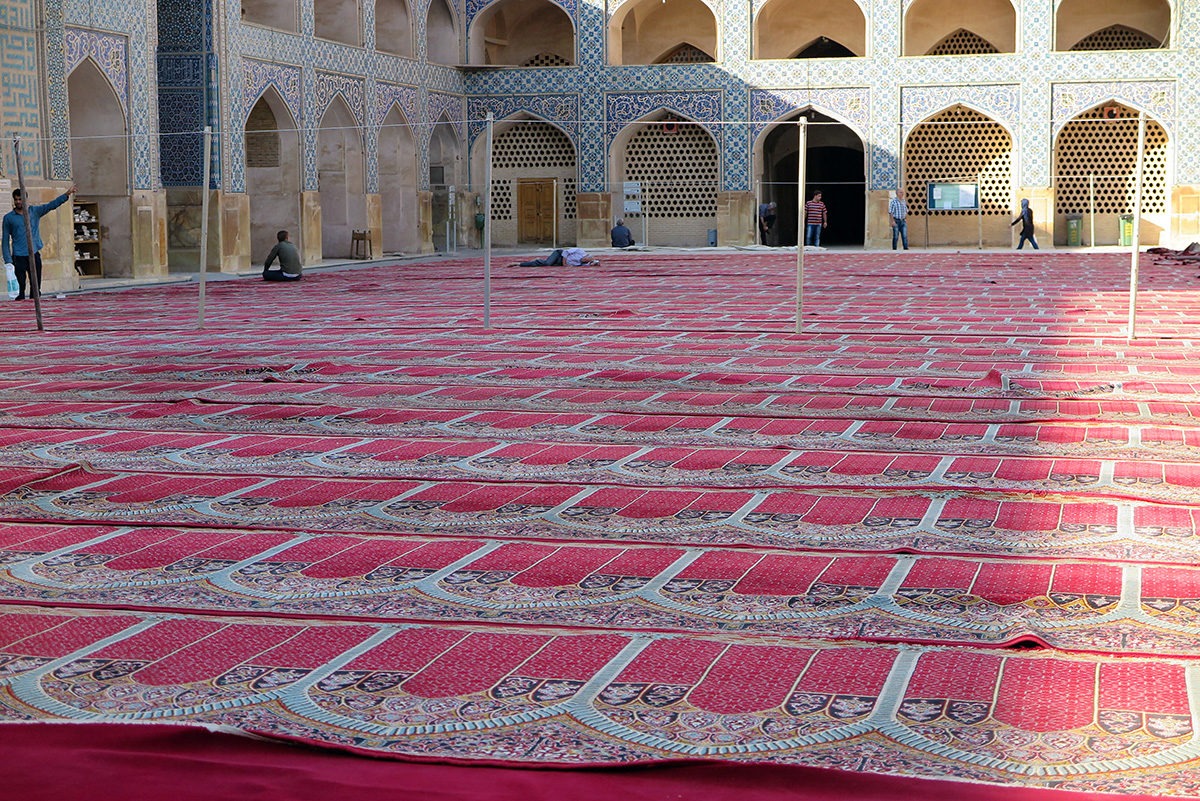 Getting ready for an afternoon prayer.. first step is to roll out these big carpets.

After you’ll speak with a few locals, you’ll notice how they naturally divide the past before and after the Revolution, when the spiritual leader Ayatollah Khomeini took over and Iran became more Islamic. 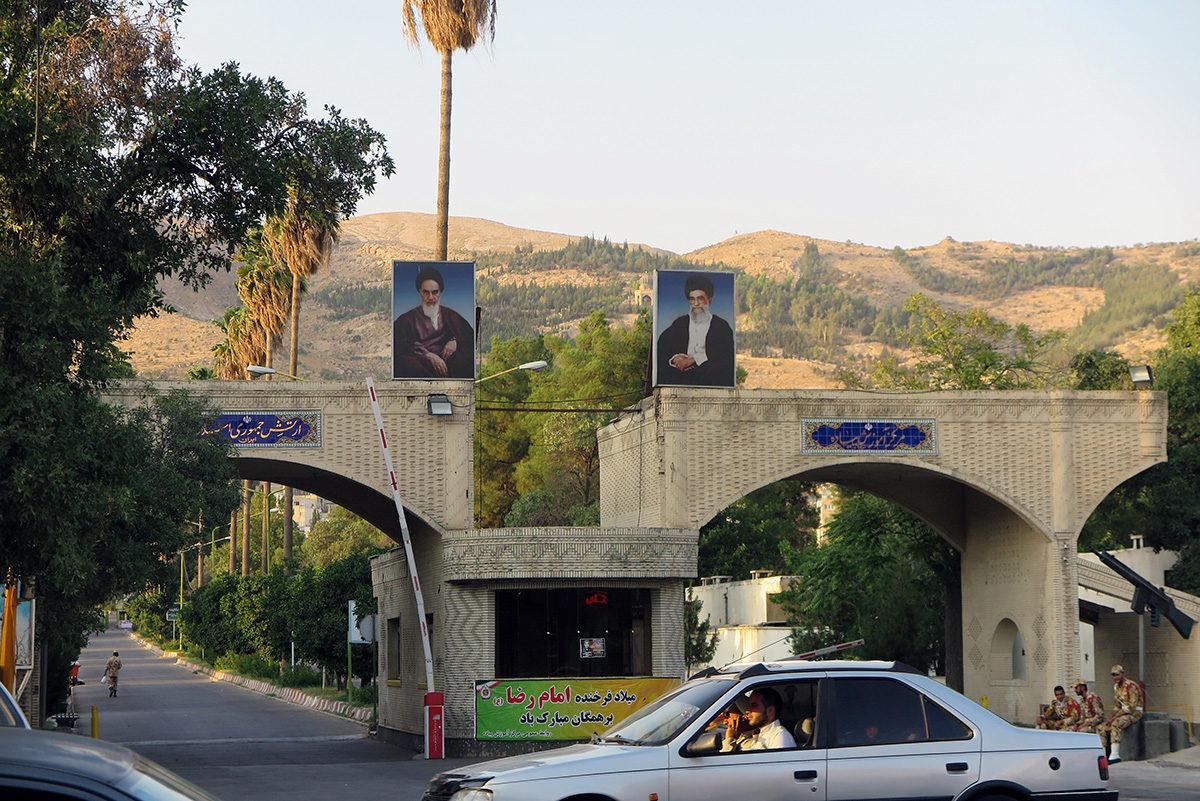 Portraits of Ayatollah Khomeini and the current Ayatollah Ali Khamenei are present everywhere you look.

Iranians are so diverse – you can even meet green-eyed people!

There are many ethnic groups living in Iran. You can see representatives of nomadic tribes and of the neighboring countries who have fully assimilated and become Iranians.

You’ll be amazed by the big bright blue or green eyes of many! 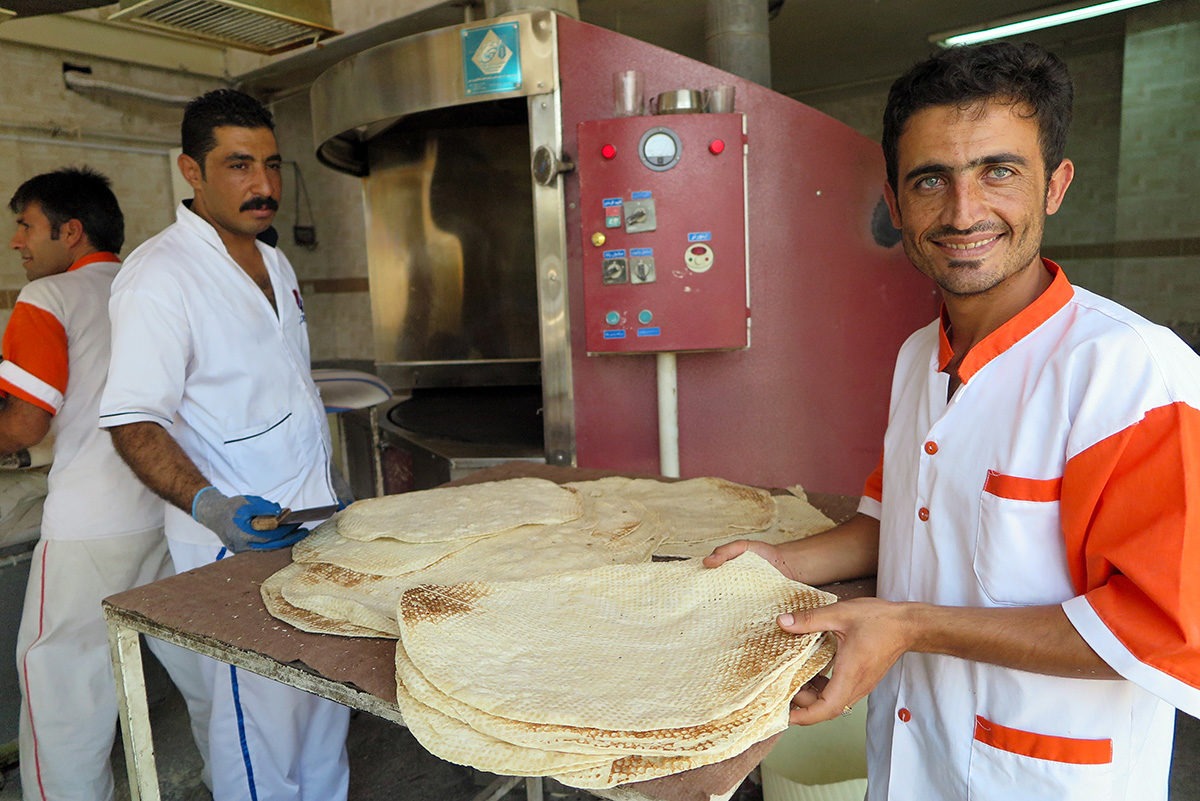 Green eyed baker in Shiraz, Iran. He can be either of an Afghan origin, or from a nomadic tribe.

Women have a certain level of freedom

I’m not here to praise Iranian women’s freedom as it’s obviously far from what we’re used to in Europe, but compared to other countries in the region women have relatively more rights.

Take the then 18 year old film director Samira Makhmalbaf who became world-famous by directing ‘The Apple’ in 1998. She’s a woman, and young!

Also, as opposed to e.g. Saudi Arabia, women are allowed to drive. When it comes to women’s rights, Lonely Planet quite fittingly calls Iran the ‘Country of contrasts’.

In fact, many households are ruled by women. Mothers have the upper hand at home while outside, it’s the men. This dynamic seems to work quite well for Iran. 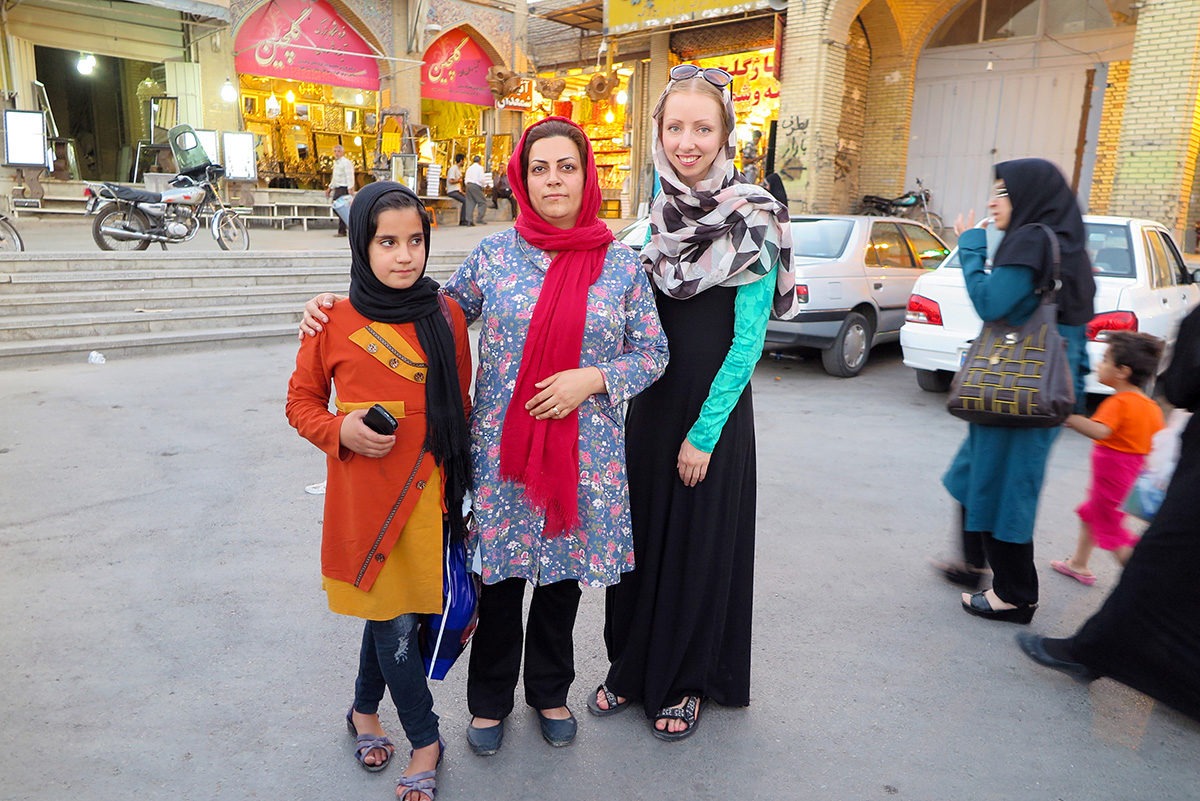 With local ladies in Esfahan, Iran

Iranians are proud of their nation

Persia has a long history and Iranians carry a lot of national pride in them.

Some people you’ll meet might be critical to certain past or present representatives, but the overall feel you’ll get is that they are proud to be Iranian. 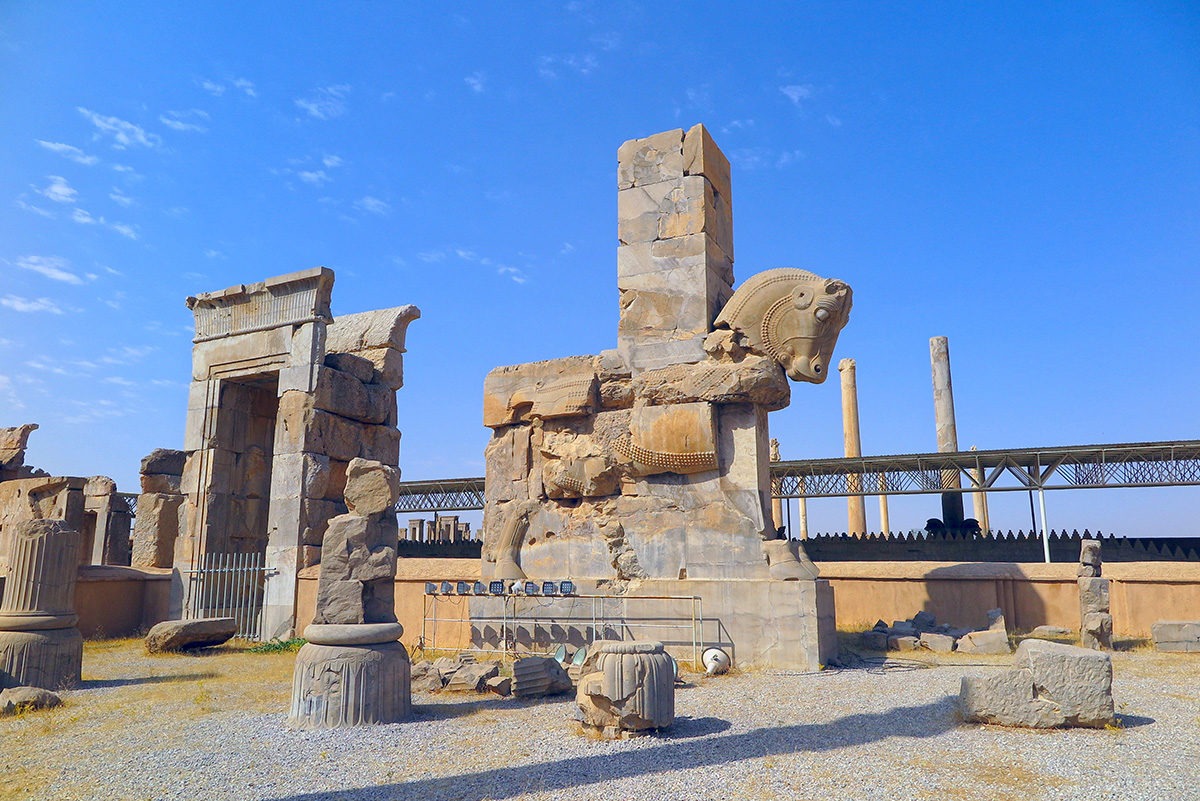 The incredible ancient city of Persepolis, just an hour away from Shiraz.

Iran is the no. 1 nation for picnics

I’ve never seen anything like it! Any patch of grass, or actually even a concrete sidewalk, is an ideal picnic spot!

People roll out a Persian carpet, get out flasks with tea and some snacks and their favorite pastime is on! Some even bring gas stoves and actually cook their meals.

If you’re in Esfahan, walk around the Imam Square in late afternoon, you’ll see many locals sitting down for a picnic with family or friends. If you’re lucky, you might even be invited to one. 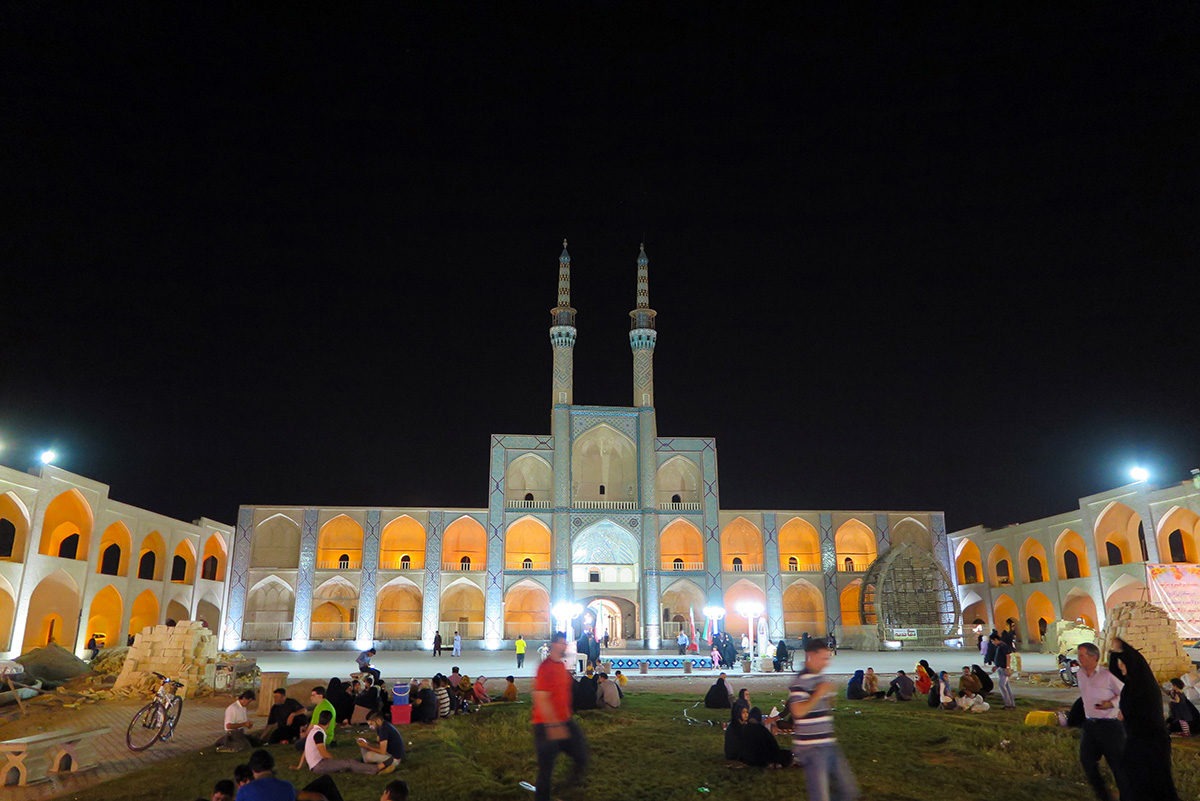 Love of family emanates from Iranians like from no other nation I’ve visited. Perhaps it’s also because they don’t use strollers much, so they carry their young ones in their arms.

You can often encounter parents or grandparents cuddling their babies and it really seems like family is in the center of the universe for them. 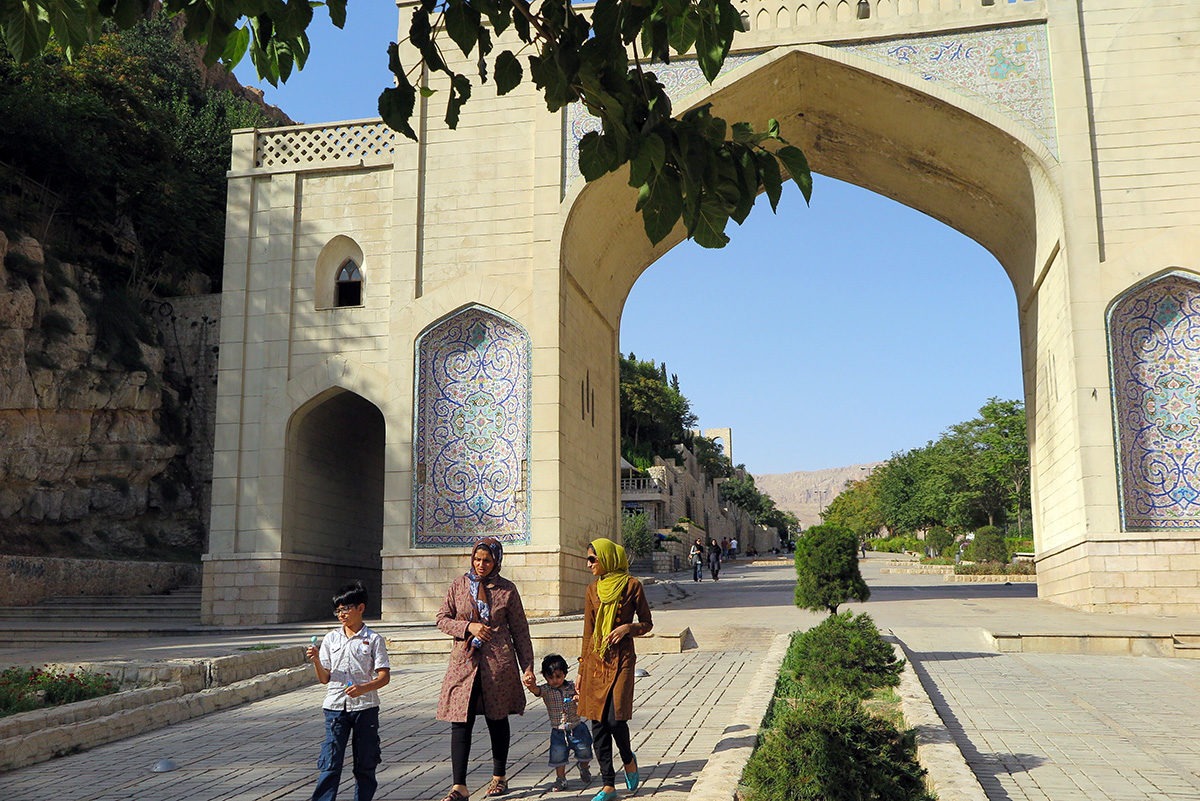 Women with kids in front of Quran Gate, Shiraz.

Iranians don’t eat out very much

You might find out there are not restaurants on every corner as you’re used to from your travels. Iranians traditionally eat most of their meals at home (or on a picnic), with a work lunch occasionally taken at a street stand.

It’s not that common to go eat out.

Many of the restaurants you’ll encounter have been set up for tourists, and that’s not necessarily a bad thing. If you stay at a traditional house instead of a hotel, you can taste the real homemade cuisine that’s so sought after! 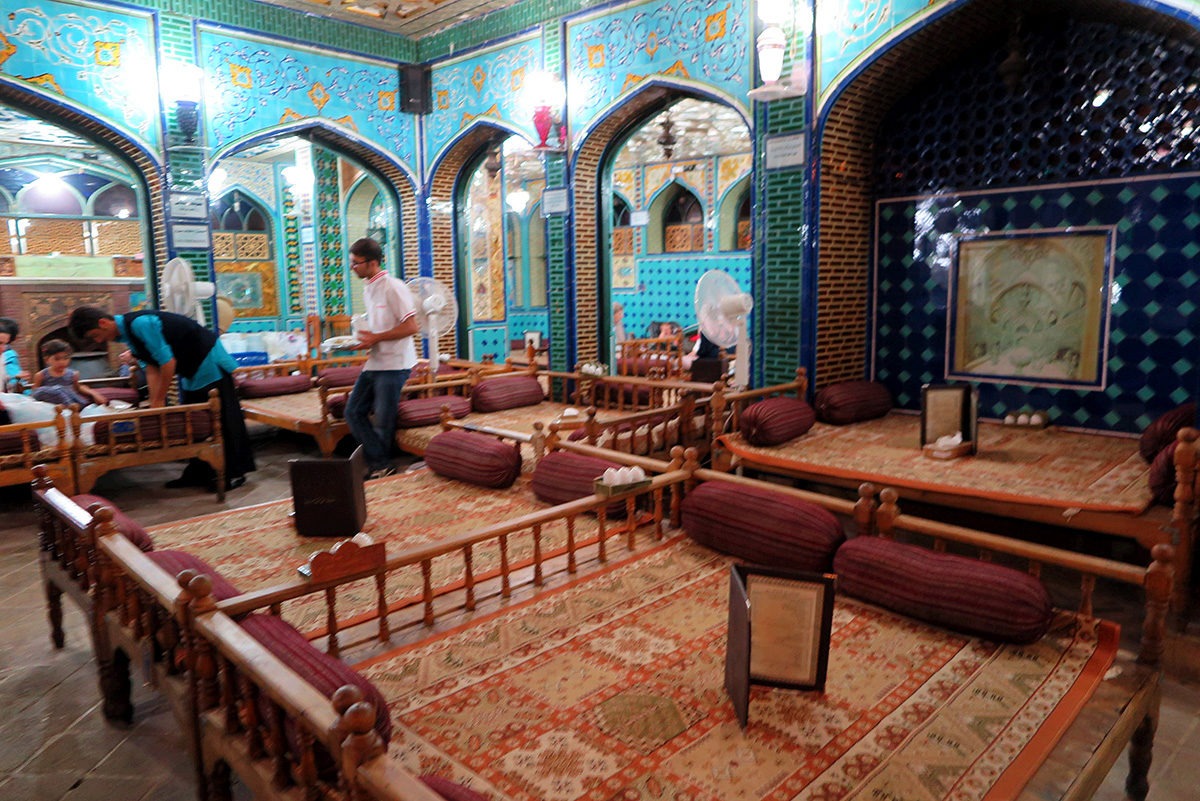 One of touristy, but good, restaurants: Traditional Banquet Hall in Esfahan.

Generally speaking, the North including Tehran is much more liberal when it comes to views, opinions and even clothing.

The further to the South you’ll go, the more long black chadors you’ll see and the more conservative and traditional people are. Just be aware of that if you travel down South. 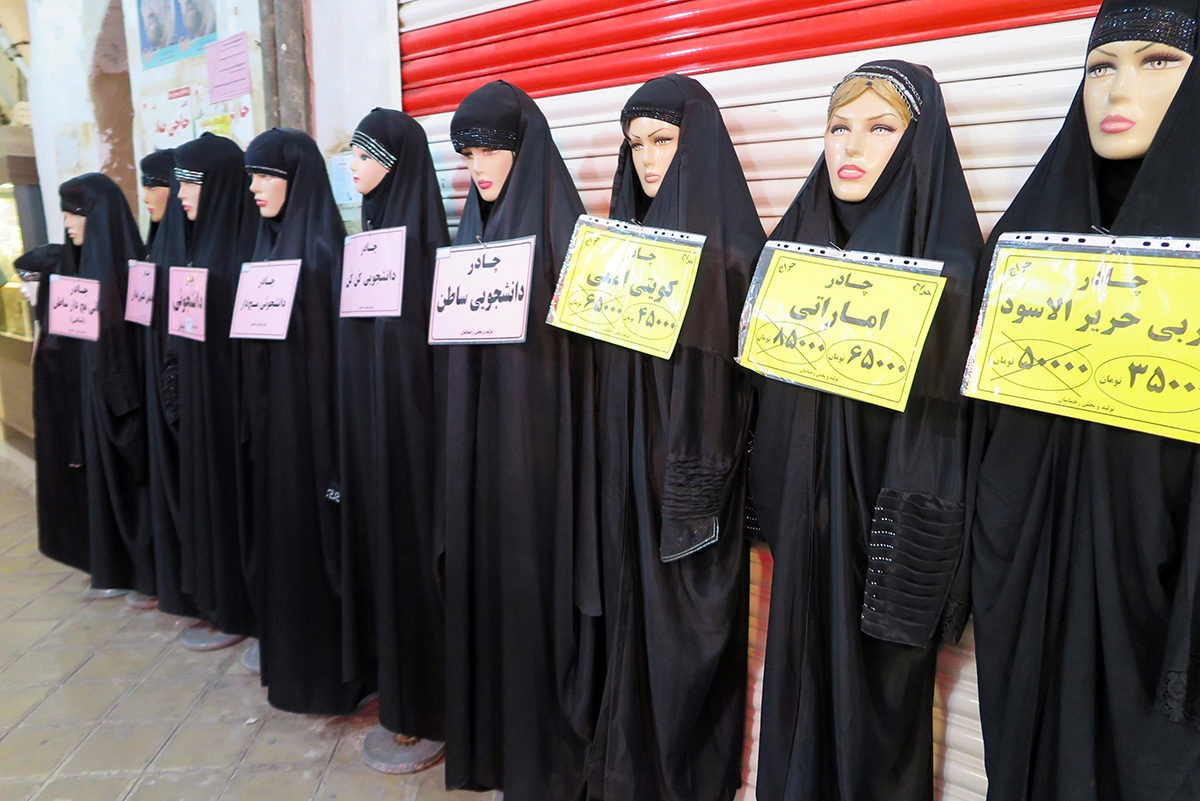 A wide selection of chadors in a bazaar of Yazd.

Iran is not touristy

Among the friendly people who’ll approach you, there might be an occasional vendor, but even if you’re taken into a carpet shop for a cup of tea, you’re in no way obliged to buy anything and you can easily get out of there.

The lack of ‘pushiness’ from street vendors is refreshing!

But it might not last forever. Iran is becoming increasingly more popular among travellers, so go visit while it’s still unspoiled by mass tourism! 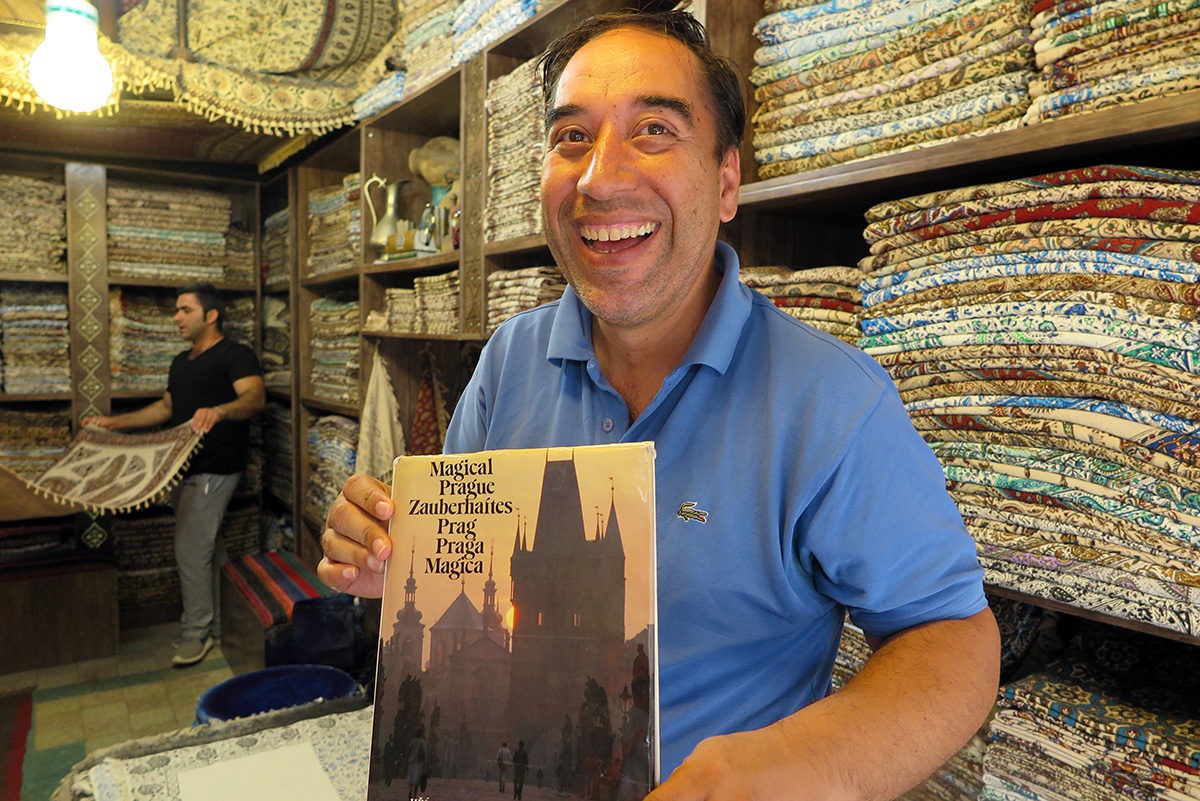 Funny Behrus, a seller of rugs, has friends in Prague and showed me a book he got :)

One resource that helped my tremendously to wrap my mind around the country’s history and better understand the people: Lonely Planet Guidebook. The one on Iran is a high quality one. Check it here.

If you’re considering travelling to Iran, get inspired by my 2 week itinerary. And – I even have advice on what to wear (for both ladies and gents).

For some further reading on the ethnicity of Iranians, the early history and cultural development, head to this Wikipedia article.

What do you think? Would you travel to Iran? Have you been there already? Do you agree with my views?

Enjoyed reading? Pin it for later! 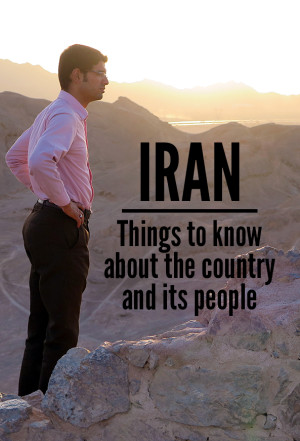 as an Iranian, I confirm the whole article :D our money has no vaule front of dollar and most of other countries :P

If you look at the petroglyphs of Persepolis, which are 2,500 years old (a thousand years before Islam), you will see a picture of a woman with a tent on horseback. Tent, which is an original cover for Iranian women with a high social status The tent, while introducing women as family-friendly, also prevents possible harassment by unhealthy men and is a form of security for women. I recommend you try this Iranian cover. And share your experiences with others. In the Qur'an, which is the heavenly book of the Prophet of Islam, in Surah Noor, women are advised to wear a veil and a mantle, from which it can be understood that the chador is an Iranian covering that has been approved by Muslims.

Would love to go to Iran.

I am persian thank you for this text

Hey there.Your article is really beautiful about my country and I appreciate that; It's a pleasure for us if a traveler come's to our country and we will entertain as well as we can,but these are the laws that is made a little weird environment in our country,maybe smn thinks that we are barbarians or cold peoples and I have to say that this things are wrong and there are nothing except roomer's. At all if 1 day smn wannted to come to our country we'll be happy :)