Taxi drivers are tricky. You never know who you’ll bump into, because in most cases you’ll need to get a cab from the street, rather than calling a number.

While living in China and travelling in Asia, I developed a technique that gave me around 70% success rate when driving a cab, even in the middle of the night.

So what’s the trick?

It doesn’t matter if you speak the local language well or not at all. Try to be nice and engage in conversation with the taxi driver. You can even use your hands if he can’t speak any English. Just try and your efforts will most likely be awarded. 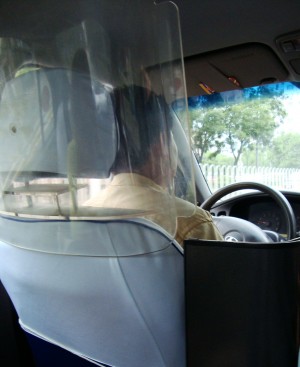 This one would be difficult to talk to from the back.

Here are some tips on what to ask a fellow taxi driver:

Basically anything is enough. If you’re an extroverted type, I’m sure you’ll have no difficulties finding an appropriate topic while respecting the local culture (e.g. it’s never good to ask too much about religion). And for the shy ones among you, just throw some of the above questions out there and that’s it! Easy peasy.

One thing to look out for: It’s possible that the driver will have a protective shield around his seat. If you notice that, just sit in the front, it’ll be much better!

Do you have a taxi horror story? Share it in the comments!

i've been scammed more by drivers in Europe. Never have I had a problem yet with drivers in China. most have treated me just like a regular customer. No complaints here.

Well, a lucky guy you are!

My biggest tip is to always insist the meter is turned on in Thailand or else agree a price before the cab moves off!

what works for as to avoid being scammed is to never get a cab when I am in touristic area, instead I walk a couple of blocks then take one. In Thailand taxis never use their meter if you take them from tourist spot.

Is China Safe For Tourists?

[…] In big cities like Beijing, Shanghai, Guangdong, Chongqing, Chengdu… the locals are used to foreigners and the only annoyance that you might experience would be overcharging. You’re more likely to witness a fight between locals rather than to be involved in one, providing you don’t offend anyone and keep your calm even if a taxi driver insists on a much higher price than the standard. (For advice on how to avoid being cheated by a taxi driver in China, check out our other article: https://www.travelgeekery.com/avoid-being-cheated-by-a-taxi-driver-in-asia/) […]